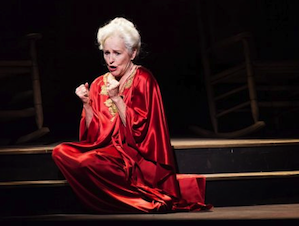 Flicka as the 90-Year-Old Heroine of New Opera

Based on a play by Horton Foote, the one-act opera has 90-year-old Myrtle Bledsoe (von Stade) on stage nonstop for its 80-minute length. Through it all, writes Steven Brown in the Houston Chronicle:

Myrtle launches into a story that ranges through adultery, family tensions and killings, plus other sorrows only mentioned ... She ends that recollection with a confession that shows the power of the opera's text to sum up her feelings.

"What I miss about those seven glorious years is — me," she sings.

On Friday, von Stade made Myrtle's soul-searching hit home through her flair for bringing words alive, from scornfully spitting out the name of Hunter's mistress to lingering over the word "beauty" the way Myrtle's eyes must have lingered over the Texas prairie. Though her singing was always committed, it sometimes was only approximate in pitch; when the music was conversational, that wasn't a liability, but some of the big moments cried out for a steadiness and heft that von Stade didn't have.

Yet the music's momentum carried through those spots, and the impact was all the greater because von Stade cut such a compelling figure. As the 90-year-old Myrtle painting at her easel as the curtain rose, von Stade stood straight and resolute. But when memories brought back old emotions, von Stade made them show — smiling softly as Myrtle recalled long-ago admirers' compliments, turning stone-faced in a confrontation with Hunter, sinking to the floor when news reduced her to despair.