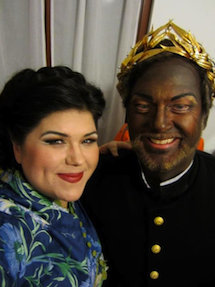 Much has been written about Moore's dramatic Tosca debut on Thursday, a career-making event for a singer already well on her way to fame, but what was it like to her? She wrote to friends and fans:

I am blogging today and will post that blog after I gather together what remaining brain cells I have left. I had NEVER rehearsed with orchestra, I had run through staging ONCE and got about 10 minutes warning. Here's to adrenaline and preparation and to a mind that deals very well with splitting apart and still functioning. Thank you to every single person who has indicated or flatly told me that I cannot do this ... and thank you to doubt. You have all taught me how to fly.

She wrote on the following day:

I have sat here steeped in adrenaline for hours and hours and also steeped in gratitude. I want to throw out a few names and thoughts as they come. I think a night like last night demands gratitude at an almost meditative level. I could not be here without two very vocally gifted parents. I could not be here without every single high school, college, and grad school professor who saw more in me than I saw in myself and who pushed me.

I could not have done this last night without the direct support of the S.F. Merola/Adler Young Artist Program and without the unwavering belief of Sheri Greenawald and Mark Morash. I could not be here if David Gockley, our general director, had not asked to "hear me again" during an audition. I would not be here if Gregory Henkel, our artistic administrative director did not believe in me ... I thank the wig and make-up department, especially Gerd M Mairandres, for teaming together to get me ready in record time. I thank musical staff John Churchwell and assistant conductor Giuseppe Finzi for walking through cues and tempi with me.