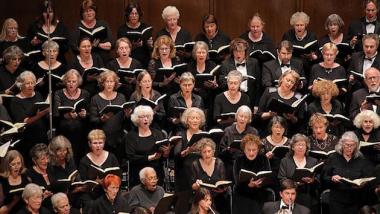 As it always does, the Berkeley Community Chorus and Orchestra is putting together an ambitious and inviting program, to be presented in free concerts to the community. The year’s first musical adventure from BCCO will be heard in UC Berkeley’s Hertz Hall at 8 p.m. Jan. 5, then at 3 p.m. matinees on Jan. 6 and 7.

Led by Music Director Ming Luke, the program includes Sergei Prokofiev’s 1939 cantata from his score for Sergei Eisenstein’s film, Alexander Nevsky, with mezzo Emily Skilling as soloist; instrumental excerpts from Prokofiev’s Romeo and Juliet; and selections from Sergei Rachmaninoff’s All Night Vigil. Under a special program of mentoring young conductors, Luke is assisted in preparation for the concerts by Ondine Young.

The 230-strong BCCO is an outstanding organization among the country’s thousands of community choruses (40 million singers in the country, 500 choruses identified in the Bay Area Choral Directory alone) because of its bold programming and frequent scheduling of large-scale works. In just the past two years, Luke and the chorus met successfully such big challenges as the Dvorák Stabat Mater, Requiems by Cherubini and Mozart, Britten’s towering War Requiem, Brahms’s A German Requiem, Bernstein’s Chichester Psalms, and a commissioned work by Kurt Erickson for BCCO’s 50th anniversary.

BCCO was founded in 1966 by Eugene Jones, a path-breaking African American conductor in the Bay Area. Singers and instrumentalists join without audition and performances are always given with free admission. Contributions, donations, and a modest tuition required from participants help keep the enterprise afloat.

Members of the chorus not only pay tuition and make financial contributions, but — according to the chorus’s Janice Murota — an amazing 85 percent also “volunteer in some capacity or other: arranging rehearsal and performance venues, writing up material for the website, doing publicity, taking photos, paying bills, writing copy for our programs, etc.”

Chorus members have previously toured twice in Europe and plan a third tour in 2019, with the Brahms Requiem in the Baltic nations. The chorus sponsors the Berkeley Community Chamber Singers to perform in hospitals, senior centers, and community events under the direction of Derek Tam, and the Berkeley Women’s Community Chorus, directed by Debra Golata.

The program’s Romeo and Juliet excerpts are easy crowd-pleasers without the novelty and challenges the other two works provide. The Alexander Nevsky Cantata comes from the crisis-filled period just before World War II, when, in August 1939, the stunning non-aggression treaty was signed between Hitler’s Germany and Stalin’s Soviet Union — preceded by ferocious saber-rattling and followed in just one month by Germany’s invasion of Poland and the beginning of the war.

Nevsky, the 13th-century Russian hero who defeated an invading Teutonic army on a frozen lake (hence the famous “Battle on the Ice” section of the cantata), served as a powerful symbol in this artistic call-to-arms in defense of the Soviet Union. Both the film and the music are glorious, in a rare union of art and propaganda. Prokofiev arranged the film score as a cantata for Stalin’s 60th birthday.

Of the other major choral work at the concerts, Ondine Young writes in the program notes:

The first performance of the All-Night Vigil was in 1915 as a benefit for war relief. The piece was performed by the Synodal Choir, the Russian Patriarchal Choir of adult clerics, formed in the 16th century.

Although Vigil won tremendous acclaim, it was banned in 1917 after the October Bolshevik Revolution. Rachmaninoff was a member of the Russian bourgeoisie, and his lifestyle was seen as incompatible with Bolshevik ideology. Two months after the Bolsheviks came to power, Rachmaninoff and his family left Russia and later, in 1918, settled in New York. BCCO is performing three of the original 15 movements.