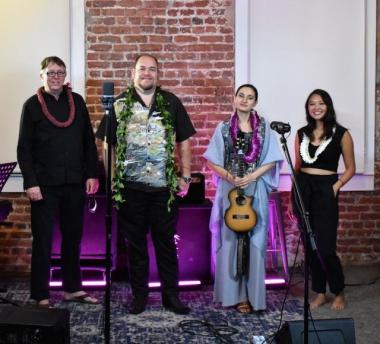 Hawaii Opera Theatre Persists in the Pandemic With “Kanikapila”

Quinn Kelsey is only 42, so he is decades away from “the end of all our exploring,” but like in T.S. Eliot’s Four Quartets, he has arrived at the point where he’s starting to “know the place for the first time.”

The baritone, who now goes by his full birthname of Quinn Kamakanalani Kelsey, was born in Honolulu, attended the University of Hawaii at Manoa, and began performing opera in 1991 as a chorus member of Hawaii Opera Theatre (HOT) — the unique company carrying the mantle of opera, whose history in the “youngest” state goes back to the 1850s.

And then just as Kelsey returned home, the pandemic struck, and HOT shut down. After months of frustration, a plan emerged for a multi-year project called Hapa (“mixed”) Opera, exploring how opera and local cultures can intersect. One of the programs under Hapa Opera is the inaugural Opera Kanikapila session, featuring Kelsey, ukulele virtuoso Taimane, pianist Eric Schank, and guitarist Rachel Look.

Kanikapila is a style of Hawaiian music produced in an impromptu jam session, most commonly taking place at a beach or family gathering. “Kani” means sound, “pila” is string instrument. In this series, HOT’s digital offering, opera singers are paired with local musicians from different cultures to explore ways to combine their art.

Just as Kelsey has experience with folk and pop music in addition to opera, Taimane Tauiliili Bobby Gardner (who goes by her first name, which means diamond) performs classical music and opera along with her mainstays of Hawaiian and pop music.

Discovered at a young age by Don Ho and Jake Shimabukuro, the musician of Samoan, German, Irish, French, and Swedish ancestry became first a star on the Waikiki circuit but soon toured Japan and Hong Kong, was nominated for Ukulele Album of the Year, and was featured on Guitar World magazine’s Top 10 Ukulele Moments list.

Baritone Quinn Kelsey steps into the role of the Duke of Nottingham, in performances conducted by Eun Sun Kim.

The baritone created something special out of a shopworn production.

A Season to be Thankful: In Conversation With Soprano Angel Blue

Hot off her success in Porgy and Bess and a nonstop run of gigs, the feted singer reflects on an artist’s life in the mandated slow lane.