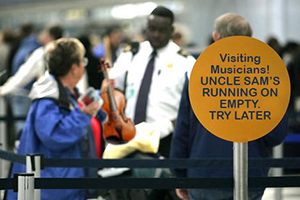 Impact of Government Shutdown on the Arts

From the League of American Orchestras: In what has felt like an extended game of high-stakes chicken, the Senate and the House of Representatives have failed to fund the federal government, resulting in a long-feared shutdown beginning today — the first since 1996. Congress must break the stalemate as quickly as possible in order to minimize the fall-out. If the shutdown is brief, here’s what to expect:

National Endowment for the Arts

For all intent and purpose, the agency will be considered closed, with approximately half a dozen staff approved to hold down the fort. All other employees will be furloughed and most contractors must stop working while a shutdown continues. In most cases, current grantees can continue to expend funds they have already received but should not expect to receive payments during a shutdown.

If you are in the process of obtaining a visa for a foreign artist, plan for possible delays during the government shutdown. Obtaining a visa is a three part process, starting with approval of a petition by U.S. Citizenship and Immigration Services (USCIS), followed by processing of a visa application by the State Department at a U.S. Embassy or Consulate abroad, and completed by U.S. Customs and Border Protection, on inspection and admission to the U.S. All three agencies continue to function, but delays are likely.

As nonprofit cultural organizations serving local communities and touring domestically and internationally, orchestras interact with a broad array of federal agencies, all of which may be impacted to various degrees by the shutdown.