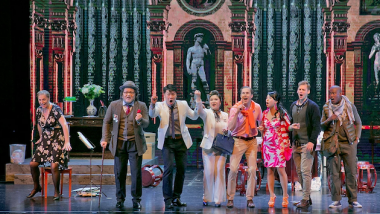 San Francisco’s Merola Opera Program is the oldest but certainly not the only international organization assisting young singers at the beginning of their careers. Among the numerous others, there is one that is unique.

Hao Jiang Tian’s iSING!, which will have its San Francisco debut concert in Herbst Theater on June 30, provides the opportunity for young Western singers to explore the emerging opera scene in China by studying Mandarin and Chinese vocal music while continuing their Italian, French, and other opera training. The program was originally called I Sing Beijing before it moved to the city of Suzhou.

As if any more proof was needed of China’s growing dominance, it is now being bellowed at full volume by tenors and sopranos. Chinese composers have become a major source for opera in Europe and North America, while more opera festivals are staged in the People’s Republic than anywhere else.

“The future of opera may be in China,” says Tian Hao Jiang, China’s most celebrated operatic export and a mainstay at New York’s Metropolitan Opera. “So it’s about time to reverse the trend. Instead of Chinese singers always coming to the West, Western singers are coming to learn Chinese.”

Some 20 young professionals from the U.S., Europe, and South America were invited to China to study both Western opera and Chinese vocals in Mandarin, with the program culminating in a gala concert at the National Center for the Performing Arts.

iSING! has also been taking participants to concerts outside China. New York’s Lincoln Center, for instance, where the concert featured scenes and arias by Rossini, Puccini, and Bernstein, as well as a historical tour of modern Chinese opera beginning with folk opera from the 1940s to vocal works from contemporary China.

The iSING! concert in Herbst Theater will present seven of the program’s singers, all already on an advanced operatic career path:

Petrus, who has been performing both Western and Chinese opera in the U.S., Europe, and China, has also recorded a solo CD, A Great Distance, a collection of Chinese and American art songs. She says of her iSING! participation:

“I’d already known that music brings cultures together, but I experienced it firsthand through my participation with iSING! in 2011 and 2012. It was my first exposure to Chinese music, language and culture. The program helped to fulfill my aspirations to become fluent in Chinese, to specialize in Chinese music, and even to make China one of my two homes. This year, I embarked on the first of my solo tours scheduled for the next five years throughout China, singing Chinese repertoire.”

The June 30 concert will be led by Artistic Director Tian and accompanied by pianist Fugen Wei. It is co-presented by the Beijing Foreign Studies University Alumni Association of Northern California and Peking University Alumni Association of Northern California. It is a benefit for the Asian Performing Arts Council for the 2018 iSING! International Young Artists Festival.