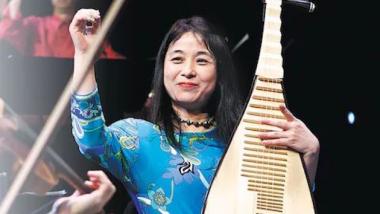 It Takes Wu Man to Bring a Village to Berkeley

Leave it to pipa virtuoso and ethnomusicologist Wu Man to go on an extensive concert tour to present a shadow-puppet band from a small village in China. The 13-city tour of “Wu Man and the Huayin Shadow-Puppet Band” stops in Berkeley on March 11.

Pipa solos alternate with flute and drum music, a battle song by Tang general Qin Qiong, puppet play All Desolate on the Eastern Campaign (the drama evoking the threat to the Tang Empire from the Korean kingdom of Koguryo), a meditation on the vanity of human ambitions from Cao Xueqin’s 18th-century novel The Story of the Stone, martial songs ... and much more.

How did it all come together? A decade ago, Wu Man was asked to curate a series for Carnegie Hall’s China Festival, so she traveled and explored the cultural traditions of some of China’s remote regions. That’s how she discovered a shadow-puppet band in a small village called Huaying. Wu Man says, “ I was so fascinated and deeply affected by their performance that I had to bring them to Carnegie Hall. After that initial visit, I went back to their village again and filmed them for my documentary Discovering a Musical Heartland.”

The energy that they put into their performances is incredible; their music is so raw and real — very different from the polished concerts we typically see in the concert hall. I want to share this with audiences across our country and bring awareness to this music that is still being performed today in the remote villages of Northern China.

Little known outside the mountains of northeastern China until Wu Man brought it to Carnegie Hall, the group, formerly known as the Zhang Family Band, continues a centuries-old tradition of blending music with drama and classic Chinese shadow puppetry.

The puppetry tradition first appeared during the Qing Dynasty under Emperor Qianlong (1736–96) and has been passed down from generation to generation.

For Wu Man, this is a continuation of her own journey from her native Hangzhou to the Central Conservatory of Music in Beijing at age 13, and later she became the first recipient of a master’s degree in pipa. After her first exposure to Western classical music during visits to China by Seiji Ozawa and Isaac Stern, Wu Man first visited the U.S. as a member of the China Youth Arts Troupe.

She moved to the U.S. in 1990 and became a leader of cross-cultural causes and movements, finding a place for the pipa, and similar string instruments zhong ruan and da ruan in new solo and quartet works, concertos, opera, chamber, electronic, and jazz music, as well as in theater productions, film, dance, and collaborations with visual artists including calligraphers and painters. Her collaboration with the Kronos Quartet and the Silk Road Ensemble has been especially prominent.

Mu Man and the Huayin Shadow Puppet Band perform Sunday, March 11 at 3 p.m. in Hertz Hall on the UC Berkeley Campus. Tickets and details are available at the Cal Performance event page.

Immeasurable Light, the new CD from Chinese pipa master Wu Man, virtually wallops you over the head with its first track, Jacob Garchik’s arrangement of The Round Sun and Crescent Moon in the Sky. Part of the repertoire of the Zhang Family Band, it is as raucous as it is joyous.