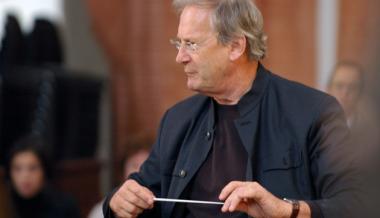 It's News to Me: No Hint of Aging for Orfeo

What Shakespeare wrote of Cleopatra - "Age cannot wither her, nor custom stale her infinite variety" - very much applies to Claudio Monteverdi (1567-1643) and John Eliot Gardiner.

Gardiner, who turned 72 on Monday, is leading his Monteverdi Choir and English Baroque Soloists in a Davies Hall performance on Monday, presenting a concert performance of Monteverdi's 1607 Orfeo, which is narrowly squeezed out of "first opera" honors by Jacopo Peri's 1597 Dafne and 1600 Euridice.

In spite of all that antiquity, Gardiner says there is no sense of repetition or fatigue as he is performing the work over and over again over the decades, having recorded it twice:

"Performances are noticeably different," Gardiner says, "there is a fresh approach every time; it's still a work in progress."

San Francisco Ballet and England's Royal Ballet agreed to a co-production of a full-length work based on Mary Shelley's Frankenstein, to be choreographed by the Royal Ballet's Artist in Residence Liam Scarlett, 26, whose Hummingbird is a big hit here.

Countering the common perception that Frankenstein is a horror story, Scarlett sees the narrative as “an astonishing piece of literature about life, death, and above all, love,” and his new ballet will explore themes of betrayal, revenge, and acceptance.

The new work will be shown first in Covent Garden, next year, and S.F. Ballet will present the production during its 2017 repertory season.

The score is commissioned from Lowell Liebermann; John Macfarlane designs the production, and lighting design is by David Finn.

Liebermann has written more than 100 orchestral, opera, and chamber music works, including numerous productions for the Royal Ballet and Birmingham Royal Ballet.

A somewhat unusual case even in the New World's melting pots, João Kouyoumdjian comes from a Brazilian-Armenian family. A graduate of the Juilliard School and the University of São Paulo, where he studied under Sharon Isbin and Edelton Gloeden, respectively, he has been winning awards and receiving rave reviews for concerts in Carnegie Hall, Lincoln Center, Yerevan, and elsewhere.

He has also been featured on numerous, nationally broadcast concert series in his homeland, including Movimento Violão.

The guitarist is making his debut here on May 17, in San Francisco's Church of the Advent of Christ the King, in a free concert, with $10 suggested donation at the door.

The recital is a promotional concert for his second album, just released, Kouyoumdjian Plays Bach: New Transcriptions for Guitar, featuring unaccompanied works for cello and violin by J.S. Bach, transcribed to classical guitar by Kouyoumdjian.

From Gridiron to Tippett Opera

In an article with the questionable title of Why American Football Players Make Perfect Opera Singers, the Telegraph reports Ta’u Pupu’a's opera debut, in Graham Vick's production of Michael Tippett's opera The Ice Break in Birmingham.

Called an "amiable Polynesian giant," the former lineman for the Cleveland Browns, was sponsored by Kiri Te Kanawa, studied at Juilliard, and became a professional opera singer.

The singer says his approach to football or opera is identical, and the Telegraph comments:

Music and sport have a deep affinity, shown by the fact we use the word ‘play’ for both activities. As Pupu'a himself points out, opera and football have much in common, beyond tearful fans and hyper-inflated pay. “You need to pace yourself, so you don’t over-sing or blow yourself out in the first quarter,” he told <em>The Times</em>. “You don’t go out and party the night before. The diet is the same. You learn how to sing with finesse and with power and the same time deliver a message.”

Dear Ones, near and far: I am turning to this entrepreneurial undertaking as a way to finance my career back into functionality.

Due to very unfortunate managerial problems, my career has experienced a terrible downslide to the point of almost non-existence. Because of this, I have been forced to completely deplete all existing savings and retirement, causing me to practically live on fumes.

Needless to say … I am now without management.

In addition, my bank of 19 years - DeutscheBank - refuses to give me any help to get my business back on track, something that I feel they would be happy to offer to other self-employed business people … just not to me perhaps because my business happens to be Opera.

However, in the midst of this personal chaos, I have been able to slowly find work on my own, almost at the same time I was thrown out of my management company. Now, things are beginning to look very good, indeed. I have engagements coming up very quickly in Italy, Mexico and the U.S. Other projects are beginning to appear on the horizon. My career is showing signs of life, again.

And now, at the point where I am about to embark on these new engagements … I am without the funds to support myself with basics like travel, lodgings, and food nor to be able to keep the home-fires glowing in paying regular monthly costs of phone, internet, water, health insurance, etc.