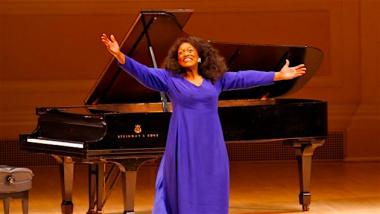 Tributes are pouring in for the late American soprano Jessye Norman, who died yesterday at the age of 74, of septic shock and organ failure, following from an injury to her spinal cord four years ago. In an official statement for the Metropolitan Opera, General Manager Peter Gelb called her “one of the greatest artists to ever sing on our stage.” The New York Times and The Guardian have each compiled their list of Norman’s 10 greatest singing moments. Singers from Renée Fleming to Dianne Reeves have shared what Norman’s artistry meant to them. Behind it all: a moving voice that, like all great voices, defied categorization.

Born in Augusta, Georgia in 1945, and educated at Howard University, Peabody Conservatory, and the University of Michigan, Norman established her career in the 1970s not at home but in Europe, singing operas from Handel to Wagner. She made her Met debut in 1983, double-cast as Dido and Cassandra in a season-opening production of Berlioz’s Les Troyens, two roles she came to be closely associated with. She eventually sang 80 performances there. She put her stamp on a range of parts such as Leonore in Beethoven’s Fidelio, Aida, Sieglinde in Wagner’s Die Walküre, Ariadne in Richard Strauss’s Ariadne auf Naxos, and Judith in Bartok’s Bluebeard’s Castle and many of the great song cycles as well — her recording of Strauss’s Four Last Songs, on Phillips, is still a benchmark for the work.

A slew of professional honors confirmed her status among opera’s leading sopranos. On the 200th anniversary of Bastille Day she sang the La Marseillaise at the Place de la Concorde. She has sung at two presidential inaugurations, won four Grammy awards and a Lifetime Achievement Award, a Spingarn Medal, a National Medal of Arts, numerous other awards and honorary doctorates, and was inducted into the French Legion of Honor and the British Royal Academy of Music. For recitals in 2001, she had her portrait painted by artist David Hockney.

Norman was active in social causes, founding the Jessye Norman School in her hometown, Augusta. She served on numerous nonprofit and charity boards, and spoke about social and political issues in both her autobiography and a 2004 documentary film about her life and work.

But her voice — substantial, affecting, seemingly limitless — was what carried it all. Any number of critics have tried to capture its all-encompassing nature in a word or phrase. If no written analysis can quite hold up, thankfully it doesn’t have to. An impressive catalog of performances and recordings can offer a glimpse of the outsized voice, the outsized person, for years to come.

Two legit greats team up for a powerhouse recital.