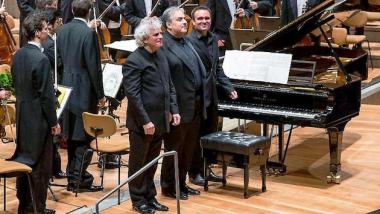 Rarely does SFS join the Berlin Philharmonic and the Toronto Symphony in commissioning music. In fact, it infrequently supports the writing of new music at all, but that’s the case with Trauermarsch. It’s performed by Yefim Bronfman, with Michael Tilson Thomas conducting. The program also includes C.P.E. Bach’s Symphony in D Major and Brahms’ Symphony No. 1.

A Financial Times review described the Trauermarsch premiere by the Berlin Philharmonic, under Simon Rattle’s direction, with Bronfman as soloist:

Widmann’s task was to provide a contemporary context for a form that haunts Mahler, Wagner, and Brahms, “to transform the rhythm and make it my own,” as he said in a pre-concert discussion.

The approximately 25-minute work, unfolding in one continuous movement, freely integrates neo-Romantic material with modernist textures to create a dramatic standoff in which the piano, after manipulating the orchestra in all directions, metaphorically sinks into its grave.

Funeral music is one of the oldest genres in the classical repertory, but what prompted Widmann to merge it with a piano concerto? He told Classical Voice, with a chuckle:

I think somebody like Franz Liszt would have liked the idea of a piano concerto as a funeral march. If there is any other kind of music that would come to my mind and is close to the sound world of my piano concerto it would be two composers who did not write a piano concerto themselves: Gustav Mahler and Alban Berg — yet I hope it is utterly my very own sound world. It is the archaic funeral-march rhythm itself that fascinated me.

Widmann says his connection with Bronfman started at the Lucerne Festival when he was the festival’s composer in residence. “Bronfman also premiered one of my piano cycles — Elf Humoresken — at Carnegie Hall, and has performed the piece many times all over the world since. It was very special to write for his powerful and yet very subtle and at times fragile playing. You can feel that the piece is written for him from the opening bars.”

Clarinetist/composer Widmann, who turned 43 on June 19, is a versatile, busy artist. He was born in Munich, became a professor of clarinet at Freiburg in 2001, and added professor of composition to his resume in 2009.