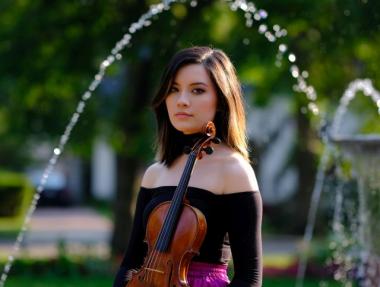 After three decades of growing reputation, the Irving M. Klein International String Competition, faced with COVID-19 restrictions this year, switched to a virtual format, and held the 34th contest via YouTube, where the performances continue to be archived.

Produced by the California Music Center, the Klein is normally held at the SF Conservatory of Music, a presenting partner. One significant concession the contest had to make to the online format was the performance of unaccompanied concertos on Sunday — a rare (or somewhat perplexing) opportunity to hear only the solo part of concertos by Brahms, Prokofiev, Schumann, Harbison, and Bruch.

Another unusual development was the merging of semifinals with finals. Explains California Music Center Executive Director Marcy Straw: “There was no usual selection of three finalists on the first day to go on to play in the finals the second day. We opted to advance all the semifinalists.”

In acknowledgement of lack of access to recording studios and to ensure equity for the semifinalists, each recorded at home and submitted one video of an unaccompanied work of Bach and the commissioned work by Robert Gibson, followed by a second video of a complete concerto, also unaccompanied.

First prize went to violinist Gabrielle Després, 19, a cash award of $13,000 and performance contracts with the Peninsula and Santa Cruz Symphonies, the Gualala Arts Chamber Music Series, and Music in the Vineyards. From Alberta, Canada, Després attends The Juilliard School; she is a student of Masao Kawasaki and Joseph Lin.

Cellist Jiaxun Yao, 18, took the second prize of $6,300 and performance contracts with the San José Chamber Orchestra and Piedmont Center for the Arts. Yao is from Qingdao, China, attends Juilliard’s Pre-College Division, and is a student of Richard Aaron and Sieun Lin.

Both Després and Yao also received awards for best performance of the commissioned work (Robert Gibson’s The Harmony of Tensions).

The third prize of $2,500 went to violinist Masha Lakisova, 18. She is from Vernon Hills Illinois, studies at Juilliard’s Pre-College Division, and is a student of Li Lin and Itzhak Perlman. Lakisova also won the Pablo Casals Prize for the best performance of the solo Bach work.

Two fourth-place prizes of $1,500 each were given to violinists Caroline Durham, 18, and Dongyoung (Jake) Shim, 18. Durham, from Holladay, Utah, attends the Columbia University/Juilliard School joint program and is a student of Masao Kawasaki. Shim is from Gyeonggi-do, South Korea. She attends New England Conservatory and studies with Donald Weilerstein.

Past Klein prize winners include such now well-known soloists Alyssa Park (1989), Jennifer Koh (1993), Vadim Gluzman (1993), and Alban Gerhardt (1989); and principal chairs in major orchestras, including the Philadelphia and Cleveland Orchestras, the New York Philharmonic, and the Boston Symphony.

The violinist brings her four-part project to San Francisco with a diverse group of composers.

Superb violinist Ian Swensen may be more self-effacing than his better-known contemporaries, but that's all to the advantage of San Francisco Conservatory students, who will get to play with him in a rare performance of the French Romantic Ernst Chausson's Concerto.