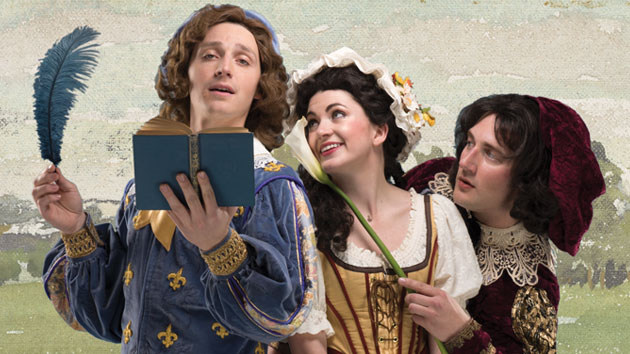 With apologies to Shakespeare and Henry V, something to divert attention from the persistent, numbing headlines of the day:

Once more unto the breach, dear Lamplighters, once more;
Or close the wall up with our Gilbert & Sullivan hiatus.
In performance there’s nothing so becomes a man
As modest stillness and humility:
But when the blast of revival blows in our ears,
Then imitate the action of the tiger ...

As before, I enjoy employing properly Victorian parlance, which is used generously in the opera, to speak of Patience as “a true amaranthine, empyrean paragon of theater.” This hilarious, silly work also has historical significance: Its 1881 opening run in a small London theater became instantly popular, with eight songs encored on opening night, prompting the producers to move it to a newer, larger venue: the Savoy.

That was the world’s first theater lit by electricity, and the place gave its name to the Savoyards, performers and fans of Gilbert & Sullivan. Patience went on to 578 performances in the Savoy, an unusual accomplishment in those pre-Broadway-blockbuster days.

With a large cast of Officers of the Dragoon Guards (formerly dear to the hearts of Maidens All, now neglected in favor of Poets Precious) and Rapturous Maidens, Patience features in the title role “an unpretentious milkmaid,” entering after the opening chorus (“Twenty lovesick maidens we”) to proclaim, “I cannot tell what this love may be.” The leading men include Reginald Bunthorne, the vacuous poet, and Archibald Grosvenor, Patience’s “handsome childhood love.”

Witness the hapless corps of jilted Dragoon Guards as they struggle to become aesthetic initiates in order to win back their old girlfriends; and the hilarity that ensues with the sudden unexpected appearance of the handsome, aesthetic poet Archibald Grosvenor, who proves a rival for the affections of everyone else on stage.

Throughout the operetta, Gilbert & Sullivan poke fun at the aesthetic movement that sashayed across England in the late 19th century, when the output of poets, composers, painters, and designers who favored sheer beauty over social and moral substance was prolific, but — some argued — empty and self-indulgent. This artistic movement, centered around the decorative arts of William Morris and Dante Gabriel Rosetti, was so popular that many aesthetes enjoyed a cult following, making the movement easy to ridicule as a meaningless fad and ensuring that Patience was a huge hit.

An example of Gilbert’s’s versification:

Gentle Jane was as good as gold,
She always did as she was told;
She never spoke when her mouth was full,
Or caught bluebottles their legs to pull,
Or spilt plum jam on her nice new frock,
Or put white mice in the eight-day clock,
Or vivisected her last new doll,
Or fostered a passion for alcohol.

For those who fear the challenges of following such a tongue-twister, never fear: Not only do the Lamplighters excel in pristine diction, they also provide legible supertitles so you can enjoy the text coming from another place and another time.