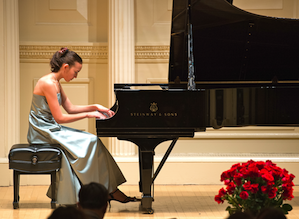 Liszt Society Festival at the Conservatory

One of the most prominent and distinguished self-promoters in the history of music will be well promoted next week when the American Liszt Society Festival is held at the S.F. Conservatory, May 30 through June 1.

The three-day event of concerts, recitals, and lectures will celebrate the man whose Lisztomania, along with Paganini, created the prototype of a rock star. The Wagner and Verdi bicentennials will be marked in the context of Liszt's career and friendships, along with the 150th birthday of composer and conductor Felix Weingartner.

This year's festival is called "Franz Liszt: Anniversaries and Connections," highlighting Liszt's role as benefactor, friend, and kindred spirit to many fellow composers, some legendary. William Wellborn, director of the festival and a Conservatory faculty member, says: "Liszt encountered nearly all of the important musicians of his day and lent his own particular brand of generosity and support to many of them."

The Wagner Society of Northern California is co-host of the festival.

Tickets for individual concerts are $10, registration for the entire festival is $125. The opening event at 9:45 a.m. May 30, features music by Charles-Valentin Alkan (1813-1888), In the Shadow of Liszt, with Wellborn and Gwendolyn Mok among performers. Among the lectures and recitals that day is an 6 p.m. concert of Liszt transcriptions of Wagner operas.

On Friday, a lecture and a recital (by Stephan Möller) focus on the Wagner-Mathilde Wesendock connection. In the afternoon, the Ives String Quartet performs the Verdi String Quartet in E Minor, followed by Liszt transcriptions of Verdi operas. An exception to the Conservatory venue, Friday evening at 8, Old First Concerts will host a recital by Antonio Pompa-Baldi.

A lecture-recital at noon on Saturday features a sesquicentennial salute to Felix Weingartner. More Wagner transcriptions follow in the afternoon, with performers from various universities. In the evening, winners of the 2012 Los Angeles International Liszt Competition — including Christopher Son Richardson, Asana Onishi, Jason Kim, Sofija Nedic, Nandani Maria Sinha, Judith Neslény, and Alex Chien — give the concert concluding the festival.