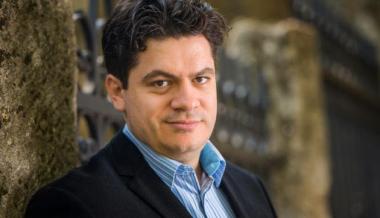 “I am beyond excited about this,” Cristian Măcelaru tweeted this morning when the Cabrillo Festival of Contemporary Music announced his appointment as music director and conductor. He is succeeding Marin Alsop, who stepped down after her 25th season concluded last week. The appointment takes effect immediately, Măcelaru is in charge of the next season, in August 2017.

Associate conductor of the Philadelphia Orchestra for the past five years, Măcelaru has worked alongside former Music Director Charles Dutoit and the current maestro of the Philadelphia, Yannick Nezet-Seguin (also the incoming music director of the Metropolitan Opera). “One of the most formative experiences in my life was spending an entire season working very closely with Charles Dutoit,” Măcelaru was quoted as saying, in a Windsor Star interview.

“We are absolutely thrilled to have found Cristian Măcelaru,” says Cabrillo Executive Director Ellen Primack. “His curiosity and genuine passion for new music, coupled with his skill and dynamism on the podium, make him a perfect fit for the festival. Cristi understands and respects Cabrillo’s important role in the music world. He is confident and charming, and eagerly embraces the special spirit and ethos that have distinguished the festival and allowed it to thrive.”

An acclaimed violinist from an early age, Măcelaru grew up in Romania as the youngest of 10 musical siblings and immigrated to the U.S. at the age of 17 to continue his studies. He enrolled in the graduate conducting program at Rice University, later participating in conducting programs at the Tanglewood Music Center and the Aspen Festival. “Conducting is as important to study as any instrument,” Măcelaru has said. “There is an aspect of it that is purely technical, and you have to learn that to add to what’s already there in the brain.”

At Rice, Măcelaru became Resident Conductor of the university’s Shepherd School of Music, also the music director of the Campanile Orchestra, assistant conductor to Larry Rachleff and conductor for the Opera Department.

He was the youngest concertmaster in the history of the Miami Symphony Orchestra and made his Carnegie Hall debut with that orchestra at the age of 19. Măcelaru played in the first violin section of the Houston Symphony for two seasons.

In 2011, while already an assistant conductor in Philadelphia, about to be promoted to associate, Măcelaru won the $10,000 Emerging Young Conductors Prize from the Georg Solti Foundation. In 2012, he came to public attention when he conducted the Chicago Symphony Orchestra as a replacement for Pierre Boulez in performances met with critical acclaim. A year later, Măcelaru returned to Chicago, filling in once again.

In Philadelphia, he made his subscription debut with the orchestra in 2013, and continues to conduct them annually on subscription programs and other special concerts.

In summer 2016, Măcelaru made debuts at the Dresden Staatskapelle, Ravinia Festival with the Chicago Symphony, Hollywood Bowl with the Los Angeles Philharmonic, Wolf Trap Festival with the National Symphony Orchestra, and at the Aspen Music Festival. Additionally, he returned to the Mann Center and Saratoga Performing Arts Center with the Philadelphia Orchestra and the Chautauqua Music Festival with Wynton Marsalis and the Jazz at Lincoln Center Orchestra.

Măcelaru and his wife, Cheryl live in Philadelphia with their children Beniamin and Maria.