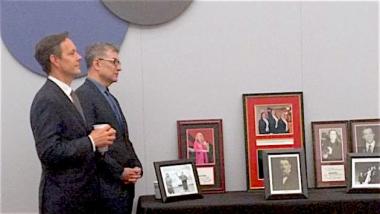 Established by San Francisco Opera General Director Kurt Herbert Adler and named for his predecessor, Gaetano Merola, who founded the company, Merola Opera Program is about to embark on its 60th season.

Now the oldest and largest such program supporting young artists as they launch professional careers, Merola has hundreds of alumni performing around the world, including some of opera’s greatest stars. Many alumni have also participated in SFO’s associated Adler Fellowship Program. The anniversary session provides an all-expenses-paid 12-week summer opera training program in San Francisco for 29 young artists from Canada, Poland, China, Colombia, Mexico, and 14 states; they were selected from more than 600 auditioned applicants.

The highlight of the 2017 season’s announcement today at the Diane B. Wilsey Center was that composer Jake Heggie and librettist Gene Scheer will write Merola Program’s first commissioned work for its world premiere in 2019. Commissioning and production are made possible by major donations from Barbara Bruser Clark and Scott Lord.

Based on a 1947 novel of the same name by the late French-American writer Julien Green, If I Were You is a Faustian fantasy about the devil enabling a young man to transfer his soul into other people’s bodies. “It is a quest for your place in the world,” Heggie said, adding that it provides for at least six major roles in addition to the hero. Heggie spoke of his decades-long familiarity and collaboration with SFO and Merola, paying tribute to the program and speaking enthusiastically of the opportunity to work once again with young artists. Heggie and Scheer have collaborated on Moby-Dick, It’s A Wonderful Life, Three Decembers, Out of Darkness, To Hell and Back, and The Radio Hour.

Recalling the years of his San Francisco Opera association, Heggie said that throughout his career as a composer and pianist, “I’ve had the great opportunity to collaborate with an array of dazzling singers. Time and again, I’m delighted to discover how many of them have a connection with the great Merola Opera Program.

“What an indelible difference Merola has made as the standard bearer for young artist programs! Just consider its history and the number of careers that have begun with Merola. Over the years, I’ve had the privilege of composing dozens of roles and songs for Merolini, and the great pleasure of seeing them inhabit and create characters in my operas.”

The Merola Class of 2017 consists of the following (returning artists with an asterisk):