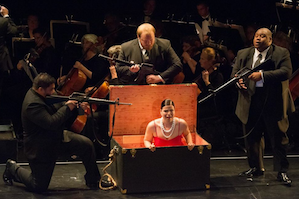 Love of opera is built on unforgettable peak moments over the years, usually experienced in the performances of big stars in major opera houses.

Last week, that moment came at the concert of young artists in a training program, singing in a school auditorium.

Meet Pene Pati. Of course you don't know the name — a 25-year-old stocky New Zealander from a Samoan family. Trust me: you will know him for years to come, and thrill to his voice of golden trumpet as the crowded house in San Francisco did on Thursday.

The 2013 Merola Opera Program's Schwabacher Summer Concert was a great bouquet of sensational performances. The venue, Everett Middle School, is surprisingly and happily satisfactory for acoustics and sightlines, never mind the Bayreuth-type seats of moderate discomfort.

With the San Francisco Opera Orchestra on stage, under the baton of Kevin Murphy, the evening was already sizzling with Alex DeSocio's broad, powerful baritone as Rodrigo in Don Carlo (and Pati as Carlo, but with little to sing, and the surprise yet to come).

Zanda Svede was the sparkling, deep-voiced Isabella in L'Italiana in Algeri, and the Latvian mezzo was restrained both in projecting her big voice and tastefully comic acting ... and then came the big moment.

Pati sang the final scene of Lucia di Lammermoor, the clear, soaring, effortless voice bringing to life Edgardo (even without an effort at acting), reminiscent of the young Giuseppe di Stefano, and wonderfully musical.

And then Pati took the final note, an open-throated, flawless, powerful high D that he held pure and solid, not in a show-off way, just a peak moment, which seemed to go on for minutes.

Whatever you can find of Pati online, such as a two-year-old "Recondita Armonia," cannot begin to convey where the voice is today, and there is no way to know where it will be when the Merola "training program" concludes next month.

And yet, there were more wonders to come: Svede's surging, velvety Beppe with Pati's lyrical Fritz in an Act 3 scene from L'Amico Fritz, and then Issachah Savage's Otello, powerful, moving, unfolding in the performance of the opera's entire closing scene.

The concert was repeated Saturday in a free (and windy) outdoor performance at Yerba Buena Gardens. Your next chance to hear these and the other Merolini is in Le Nozze di Figaro on Aug. 1 and 3, and the season-closing Grand Finale on Aug. 17.