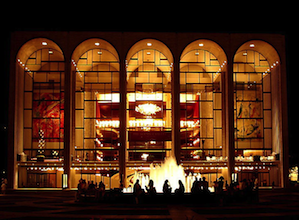 Crucial labor negotiations at the Met are still at a crisis state while negotiators are waiting for the findings of an independent financial analyst due in a day or two. The unions' last offer was a wage freeze for the next five years; management is pushing for a 14.5% cut in pay and benefits — each rejected by the other side.

The U.S. Federal Mediation and Conciliation Service (FMCS), announced today that the report of the independent analyst brought in to review the Metropolitan Opera’s finances was nearing its completion. Negotiations between the Met and the musicians (Local 802 of the American Federation of Musicians) and the chorus and other members of the American Guild of Musical Artists (AGMA) will resume later this week.

Although the Met management has announced a deadline for Aug. 17, after which, if there is no agreement, they will lock out the musicians, craftspeople and choristers, it is Local 802 and AGMA’s intention to continue to bargain in good faith until an agreement can be reached by both sides.

Bolstering management's call for cuts in salaries and benefits, a financial-disclosure document from the Met, analyzed in The Wall Street Journal, stated that deficit for the fiscal year ended July 31 will be "significantly larger" than last year's $2.8 million shortfall. Management also says cost cuts combined with a planned effort to double the endowment should "provide a substantial positive financial swing."

Last year's $2.8 million deficit followed a backlash to an increase in ticket prices that, along with superstorm Sandy, hurt box-office sales. The latest disclosure document, dated July 25, attributes this year's deficit to a decline in charitable contributions. So far, the Met has reached agreements with three of the 15 unions.

Financial analyst Eugene Keilin, who was hired jointly by the Met and two of its unions, is conducting a confidential review of the company's finances. He is a former chairman of the Municipal Assistance Corporation for the City of New York, an agency created in 1975 to address New York's financial crisis. He is also an opera fan: In the 2011-2012 season, he and his wife donated at least $25,000 to the Met, according to the company's annual report.