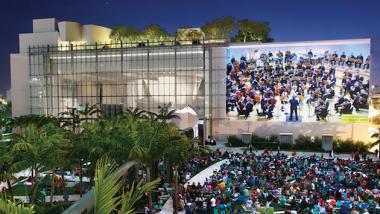 If you miss Michael Tilson Thomas around Davies Hall until he returns in November, you can watch him live in action on Facebook this Saturday, beginning at 4:30 p.m. Pacific Time. He will conduct a WALLCAST® event, a crowdsourced project shown on the wall of the Frank Gehry-designed concert hall in Miami.

The program is titled “Project 305,” which refers to Miami’s area code. The featured work, Miami Movements, is the product of a yearlong collaboration by the orchestra, the Knight Foundation, and Miami-Dade County “to celebrate the diversity of Miami and the power of music.” Composer Ted Hearne and filmmaker Jonathan David Kane based the work on crowdsourced audio and video from Miami residents.

The concert begins with Miami-based musical groups Picadillo – with vocalists Sol Ruiz and Rey Rodríguez — and the Barry Bucaneiros Brazilian drumming ensemble, continues with Gershwin’s Cuban Overture, before the world premiere of the Hearne-Kane work. The sections of Miami Movements are: I: Out of the swamp, II: The Neighborhood Game, III: Pocket here, pocket there, IV: Closer than family, V: Ode to that Miami bass, and VI: A canary in the coal mine.

A jocular report in the Miami.com website suggests that to represent Miami’s sounds faithfully, the work should include “the sound of traffic on the Palmetto ... the sound of a frother ... pots banging ... and construction.”

Before the concert, two backstage tours of the New World Center will take guests behind-the-scenes of the New World Symphony’s campus, and a virtual reality experience, shot and produced by Yellow Wood using 360-degree cameras, will transport audiences to seven distinct Miami neighborhoods.

“Technology has changed the way we live our lives and experience our communities,” says Victoria Rogers, VP/Arts at Knight Foundation. “With Project 305, we’re seeing how it can be fundamental to the artistic process. The initiative invited Miamians to participate in a creative experience with the tools they carry with them every day — their phones and mobile devices. We’re excited to see and hear how those micro-moments of sound and video people recorded were used to create a symphonic picture of Miami.”