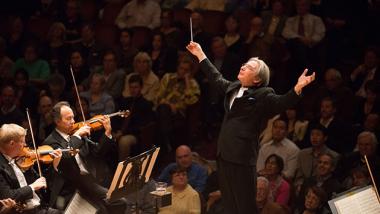 Amid the much-publicized news of his scheduled stepping down from the music directorship of the San Francisco Symphony, Michael Tilson Thomas has been selected by California Governor Jerry Brown as an inductee to the California Hall of Fame.

This year will mark the 11th class of inductees, who embody, in Governor Brown’s words, the “dynamic spirit and imagination that is the hallmark of the Golden State.”

A Los Angeles native, Tilson Thomas’s musical contributions have been felt locally, with more than 20 years’ worth of programs and recordings from the San Francisco Symphony, and nationwide, with pedagogical projects like the Miami-based New World Symphony and the nationally-televised Keeping Score.

His cultural achievements will be recognized in a red-carpet ceremony at the California Museum on December 5, which will be livestreamed here. Correspondingly, the museum’s annual California Hall of Fame Artifact Exhibit will open the next day and run through October 31, 2018. MTT will be in the company of fellow inductees, director Steven Spielberg and poet Gary Snyder, among others.

The conductor provides a revelatory reading of an iconic masterwork, devoid of the usual drama.