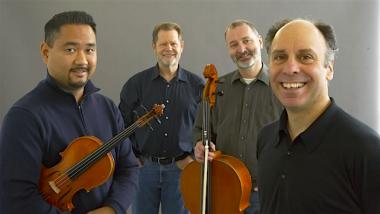 There is no more exceptional value for chamber-music audiences than the Morrison Artists Series at San Francisco State University, offering free admission to a season of first-class concerts, workshops, and lectures, all free, for the 63rd year.

When the Morrison-regular Alexander String Quartet opens the season on Sept. 16 (with music of Mozart, Penderecki and Mendelssohn), there will be a new man in charge of the Morrison Chamber Music Center, which oversees the series.

Succeeding Richard Festinger, conductor and SFSU School of Music Director Cyrus Ginwala says he and his predecessor “combined work on this transitional season, which includes new components, not always visible to the concert-going audiences.

“For example, there is greater community and university engagement with visiting artists before the concert date, new benefits for donors, a newly-established advisory board.

“Over the next three seasons, we will expand the residency activities of the visiting chamber music performers, to increase their interaction with students and audience both on and off campus,” Ginwala says.

As the longest-running chamber-music series in San Francisco and beyond, the Morrison Artists Series has presented some 400 concerts, attended by an audience of more than 100,000.

The concerts were first organized in 1956 by the May Treat Morrison Chamber Music Center with the aim of advancing the art of chamber music and encouraging its appreciation. Edward Hohfeld, a founder of the law firm Morrison Foerster and friend of the firm’s prominent partner, Alexander F. Morrison and his wife May Treat Morrison, was administrator of the Charitable Trust endowed by funds from the Morrison Estate.

Hohfeld believed that chamber music could be made accessible to everyone and that love of the music could be instilled in new generations. Given the series’ popularity, it was necessary to issue tickets — while maintaining free admission — and newcomers to the concerts should know how that works:

Two advance tickets per patron may be reserved beginning three weeks prior to each concert through the Morrison website or by telephoning the SFSU box office at (415) 338-2467. Reserved tickets are available for pickup at the box office, open Wednesday–Friday from noon to 4 p.m. and one hour prior to events.

No tickets are necessary for master classes, held in Knuth Recital Hall; attendance is available on a first come-first served basis.

The Alexander String Quartet’s season-opener on Sept. 16 will include the Telegraph Quartet joining the ASQ for Mendelssohn’s Octet for Strings. On Oct. 26, it’s the Orlando Consort, with a program of French, Italian, Spanish, and British vocal chamber music from the early Renaissance.

The Thalea String Quartet performs music by Haydn and Shostakovich, presenting the world premiere of Vincent Calianno’s A History of the String Quartet in Its Natural Habitat for string quartet and prerecorded electronics on Dec. 2.

The first concert in 2019 is on Feb. 10, by Nordic Voices, a six-voice a cappella ensemble from Oslo, Norway; the program is yet to be announced. On March 10, Musicians from Marlboro bring works by Haydn, Kodály, Ravel, and the world premiere of Ken Ueno’s Duo for Violin and Viola.

Trio Ancuza Aprodu and Ensemble Orchestral Contemporain celebrate the Debussy Centenary on April 12, with the addition of Fauré to Debussy’s music.

The seasons concludes on May 12, with the Jack Quartet, recipient of many awards, comprising violinists Christopher Otto and Austin Wulliman, violist John Pickford Richards, and cellist Jay Campbell.

The young string quartet, the first quartet-in-residence at the San Francisco Conservatory of Music, also performed early works by Webern and Beethoven.

The lights were more than dimmed at S.F. Performances’ inaugural PIVOT program at the Strand Theater. They were turned off, and they stayed off for the concert’s duration.