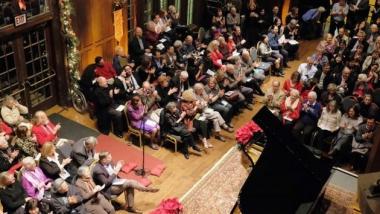 Jan. 27, the anniversary of the liberation of the Auschwitz-Birkenau concentration camp in 1945, is designated by the United Nations as International Holocaust Remembrance Day. In commemoration, Seattle’s Music of Remembrance ensemble will bring a special program to the Bay Area, honoring those whose suffering left a musical legacy never to be forgotten.

On the anniversary date, the program entitled Banned, Exiled, Murdered! is coming to Kohl Mansion in Burlingame. It features the music of composers whose lives and music were targeted by the Nazi regime and honors the courage of those who dared to continue creating music even in concentration camps.

Besides preserving the legacy of Holocaust victims, Music of Remembrance speaks to all those persecuted for their faith, ethnicity, gender, or sexuality. A free outreach program is offered at 3 p.m., Saturday, Jan. 26, in the San Mateo Public Library.

Led by Artistic Director Mina Miller, the ensemble will perform at the evening concert music by such composers killed in Auschwitz as Hans Krása (Dance) and Dick Kattenburg (Escapades), and other concentration camp victims Erwin Schulhoff (Five Pieces for String Quartet), Gideon Klein (String Trio); and “Six Yiddish Songs and Dance” from Betty Olivero’s The Golem.

A new work explores the fate of Europe’s Roma during the Holocaust.