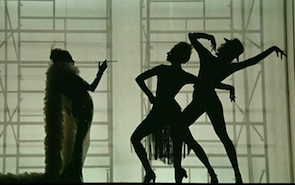 Music at the S.F. Film Festival

The program of the 57th San Francisco International Film Festival, announced today, includes an unusually high number of movies of musical interest (which is good, although classical music is poorly represented). A quick list, with thanks to the festival's Bill Proctor for helping to compile the information:

* The Other One: The Long, Strange Trip of Bob Weir, Mike Fleiss, 2014 — Documentary about a fascinating, multiple crossover musician, who emerged from the shadow of Grateful Dead band mate Jerry Garcia to be involved prominently with every good cause around. [8:50 p.m. April 29, Pacific Film Archive; 9:30 p.m. May 2, Sundance Kabuki Cinemas]

* All That Jazz, 1979/2013 — Roy Scheider stands in for writer/director Bob Fosse in Fosse's self-lacerating, autobiographical musical, about a celebrated choreographer. Restored by Twentieth Century Fox in collaboration with the Film Foundation. [12:30 p.m. April 27, Kabuki; 8:30 p.m. May 2, Pacific Film Archive]

* Thao and the Get Down Stay Down, live event — Thao Nguyen and her band The Get Down Stay Down will perform with an assortment of silent films, including Chaplin's The Pawn Shop, Robert Florey and Slavko Vorkapich's The Life and Death of 9413: A Hollywood Extra, alchemical animation by Harry Smith and classic newsreels. Nguyen will also present some of her own shorts. [8 p.m. April 29, Castro Theater]

* Frank, Lenny Abrahamson, 2014 — A pop star wannabe sees a path to fame when he is asked to join an art rock band; trouble and disappointments lead to his concealing himself with a giant fake head. Enough said. [9:15 p.m. April 26, 4 p.m. April 28, Kabuki]

* Heaven Adores You, Nickolas Rossi, 2014 — Celebrating indie rock singer-songwriter Elliott Smith, whose Academy Award–nominated "Miss Misery" from the Good Will Hunting soundtrack earned him fame, and who died tragically in 2003 at age 34. The elegiac documentary is called "at once a testament to Smith’s boundless talent and music’s ability to transcend loss." [9 p.m. May 5, 3:45 p.m. May 7, Kabuki; 6 p.m. May 8, New People Cinema]

* Stephin Merritt with the Unknown, Tod Browning, 1927 — Magnetic Fields band leader Stephin Merritt pairs off with silent cinema iconoclasts Tod Browning and Lon Chaney, for the premiere of his new score for the Freaks director’s 1927 silent The Unknown. [8 p.m. May 6, Castro Theater]