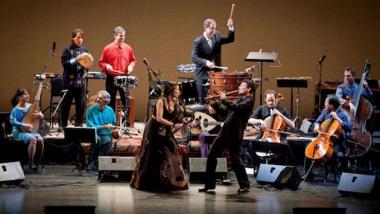 Music of Strangers Caught in Chaos of a Strange New World

For more than two millennia, the Silk Road carried travelers and trade from China to the Mediterranean. Yo-Yo Ma’s Silk Road Ensemble, performing the music of the countries along the road, is a prime force for bridging geographic and cultural boundaries with the universal power of music. Last week, as the Trump administration issued an executive order curtailing travel and immigration, members of the Silk Road Ensemble were subjected to a chaotic situation which may prevent return to their home in the United States.

A press release on Thursday announced:

Sadly, both featured musicians, permanent residents of the United States, are performing abroad right now and affected by the new executive order from the White House, making their return to the United States uncertain.

Directed by the Oscar-winner Morgan Neville (20 Feet for Stardom, Best of Enemies), The Music of Strangers is shot in six different languages, and filmed in locations as far-flung as China, Turkey, and Iran. “The film is full of brilliant performances and sumptuous colors, but what’s more incisive are the segments in which Neville zeroes in on certain members of the ensemble,” writes Anastasia Tsioulcas on NPR’s Latitudes:

In the whirlwind events of the last weekend, with the executive order stayed by U.S. District Senior Judge James Robart’s ruling, Homeland Security allowing travel by some visa holders, followed by the administration’s appeal to the Ninth Circuit, it’s impossible to know where travel rights stand at this moment. A request to the Silk Road representatives for information has not yet been answered — understandably enough, given the unprecedented situation.

Travel restrictions and uncertainty are creating a global crisis in many professions, especially in music, where international travel is just as essential as it was for commerce on the Silk Road. The impact goes far beyond the nations specifically cited; as a colleague wrote: “I know musicians from ‘friendly’ nations (Ireland, England, etc.) and from anywhere south of Texas who have toured here for decades and are just giving up because the hassles of getting in and out outweigh the benefits of performing here.”

The original impact of the travel ban was on those with nationality of Iran, Iraq, Libya, Somalia, Sudan, Syria, and Yemen — they were not permitted to enter the U.S. for 90 days regardless of immigration or travel status, or be issued an immigrant or non-immigrant visa. U.S. residents from those countries — at first even with green card residential status — were unlikely to risk travel, faced with the possibility of being denied reentry.

Overseas workers typically obtain an O-1 visa to work in the U.S., which is open to those who possess “extraordinary ability” in the arts, sports, and other fields. Under Trump’s executive order, visa holders — including those with O-1 visas — from the seven countries were barred from entering the country. Even with ban temporarily lifted, the situation is creating uncertainty or worse for artists.

“What we still don’t know,” said Matthew Covey, founder of Tamizdat, a nonprofit that helps musicians deal with visa issues, “is if the order applies to expatriates from those seven countries who are now citizens [or legal residents] of another country. If it does, then the impact will be even broader.”

A story on NPR on Feb. 6 covers additional details about musicians —including Kayhan Kalhor — left hanging, despite the lift on the ban.

UPDATE: As we were publishing this article we received the following news:

The Syrian musician Kinan Azmeh was able to return safely to his home in Brooklyn, traveling from Europe. The Iranian musician, Kayhan Kalhor, is currently in Iran and will attempt to return to the U.S. next week.