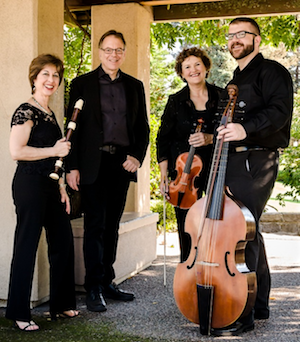 Concluding a year of concerts throughout the Bay Area, as well as tours to Arizona and Hawaii, Musica Pacifica is performing "Baroque Splendor," Nov. 7-10, in Palo Alto, Berkeley, Ukiah, and Gualala. (Had to look that up: "Gualala — formerly, Guadala, Walhalla, and Wallala — is an unincorporated community in Mendocino County. Looking good.)

They have performed at such prestigious concert series as the Frick Collection and Music Before 1800 (NYC), the Getty Museum (LA), Tage Alter Musik (Regensburg), Cleveland Art Museum, and the Berkeley Early Music Festival (four times), among others.

They have performed at festivals in Germany and Austria, and have been featured on German National radio as well as on National Public Radio’s "Performance Today" and "Harmonia." Musica Pacifica's eight CD releases on the Virgin Classics, Dorian, and Solimar labels have won national and international awards, including Chamber Music America/WQXR’s Record Award, being featured on Minnesota Public Radio, and chosen as "CD of the Month" by the early music journal Alte Musik Aktuell (Regensburg).

For such an accomplished ensemble, it's rather strange not to make the specific concert schedule available anywhere on line. Individual venues refer back to Musica Pacifica's website, and there are only some of the composers named, but not the works to be performed.