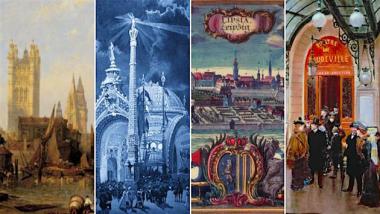 Each of these cultural epicenters will anchor one of the festival’s mainstage programs, which will feature music associated with the cities. Festival Artistic Directors Wu Han and David Finckel explain the theme:

A city is the embodiment of a civilized society. Throughout history, cities have enticed our most brilliant, visionary, and restless souls seeking to pursue artistic destinies in stimulating environments. Great cities are indisputably among the most significant achievements of humankind, works of art in themselves... The music that has emanated from these cultural centers largely forms the canon of Western music, comprising an astonishingly diverse repertoire spanning some 300 years.

For example, the opening mainstage concert, on July 14, features London and picks up on the 18th- and 19th-century cultural flowering of the city and the influx of great composers from the continent as London became one of the Western world’s musical capitals. [email protected] juxtaposes expatriate masters Handel, Mendelssohn, and Grieg with pieces by two homegrown voices of English music’s renaissance, Britten’s Suite for Violin and Piano, Op. 6, and Ralph Vaughan Williams’s Songs of Travel.

How was the festival program put together? Are locations the chicken and music the egg? And which came first?

[email protected] Artistic Administrator Nathan Paer says the decisive factor was the music emanting from the cities: “David and Wu Han looked at the entirety of the canon of Western chamber music, and from there, explored various ways of presenting some of the best music that came out of the largest musical-powerhouse cities, often at the center of these country’s cultural lives.”

The cities included are mostly capitals — the season is called “Creative Capitals” — notwithstanding the inclusion of Leipzig and St. Petersburg, the former never a capital, the latter only a long time ago. Thousand-year-old Leipzig is Saxony’s biggest city, but the capital was Dresden, which would have made a fine choice for the festival. What all of the selected cities have in common is a distinguished history of classical music.

For Leipzig, Berlin, and Vienna, there is little explanation required, as Germany and Austria were the powerhouses of classical and Romantic music for nearly two centuries, with the likes of Bach, Haydn, Mozart, Beethoven, Mendelssohn, Schubert, Brahms, Schumann, etc. setting the global and historical standards for composing music in these eras.

With London, we looked at how expatriate composers often made the city their home, so even though, say, Handel was not English, he ultimately settled in London and composed much of his music for his English patrons. His work is juxtaposed with the likes of Vaughan-Williams, who was an English-born composer.

Paris is a no-brainer, as an artistic and cultural center of Europe, also with its own slice of very distinctly national compositions/composers. St. Petersburg was home to the country’s foremost conservatory, where Russian composers began to define their own uniquely national style of composing. Budapest, as the capital of Hungary, functioned as a similar center of gravity for Hungarian musicians, where groups of composers also worked to define the nationalist Hungarian style — with a very large emphasis on folk music traditions.

The Budapest program, July 31, is another example of Wu Han and Finckel’s consistent and fearless dedication to modernist masterworks, set against classics, which always get their due. From the country that drew Haydn, Mozart, and Brahms to the folk music of Central Europe, [email protected] highlights Kodály’s Duo for Violin and Cello; Dohnányi’s Sextet in C Major for Winds, Strings, and Piano; Bartók’s String Quartet no. 5; and Ligeti’s Ballad and Dance for Two Violins.

A Photo Essay From [email protected]