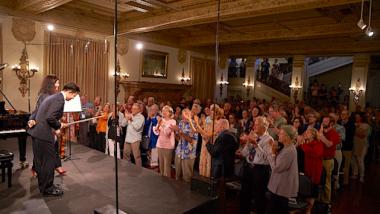 Rather than putting programs together in a haphazard way, Artistic Directors David Finckel and Wu Han, assisted by Artistic Administrator Nathan Paer, Audience Engagement Director Patrick Castillo Patrick Castillo, and a staff plan each season meticulously, according to a thematic framework. In past years, the focus was on “The Glorious Violin,” “Russian Reflections,” “Around Dvořák,” and so on.

In the same vein, the festival’s 2019 season, announced today, presents a theme: “Incredible Decades” traces chamber music’s history in seven chapters, each a program dedicated to an especially rich and consequential decade in music. From the ascent of Bach in the Baroque era, through the apex of Russian and French Romanticism, to the artistic maelstrom of the new Millennium, the concerts — and many affiliated events — sum up 300 years of musical evolution.

The artistic directors say of the season: “Classical music’s vast depth and variety continue to provide us with summer after summer of new paths to explore. In the coming summer, we will reveal music’s extraordinary evolution in seven chapters, each a program dedicated to an especially rich and consequential decade.”

Finckel told SFCV that the festival’s search for sources of great music is an ongoing process, providing “intriguing and often thrilling explorations, gazing at music’s wonders summer after summer through a seemingly infinite variety of lenses.

“‘Incredible Decades’ is one of those many windows we open on music, looking at seven periods in history which each produced a wealth of great music. We’ll ask why, how, and by whom, and along the way, we’ll bask in the intellectual and artistic richness of each distinct period.”

These are the main concerts:

The concert venue is the Center for Performing Arts at Menlo-Atherton; other events, such as the festival’s popular artist-curated Carte Blanche recitals, are held in Menlo School, which is located in Atherton.

Of the two teaching-tutoring programs, Wu Han says: “A new roster of ever-more-astounding International Program artists waits in the wings to thrill us, as does the vibrant legion of Young Performers, always melting hearts and showing us the bright future of our art form.”

Another festival specialty is [email protected] LIVE, an exclusive recording label began in 2003, presenting many of the performances each season, engineered and produced by Da-Hong Seetoo, using state-of-the-art recording technology.

Take a Tour of the 2018 [email protected] Festival

Photographer Geoff Sheil shares some images from inside the expansive chamber-music program.