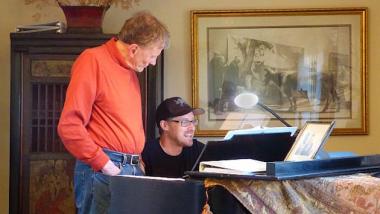 A New Musical Inhabits the Heights of Hearst Castle

It is set in 1938, when we harken back to a time where we used the word “harken.” That year witnessed the sprawling, expensive epic of Gone with the Wind. However, that same period also welcomed small gems — intimate, delightful, moving, such as Bringing Up Baby and Boy’s Town on the screen; and on stage, You Can’t Take It With You — simpler delights appeal in a manner very distant and different from expensive, large scale cinematic spectacles and they still can be memorable and endearing.

That’s the background and ambition for Castle Happy, the work of composer/lyricist Jeff Dunn and writer/lyricist John Freed. The story: Bit actor Arthur Lake gets a lucky invitation to a lavish 1938 Halloween party, hosted by W.R. Hearst and Marion Davies in their castle at San Simeon. Marion’s teenage niece (or is she?) Patricia craves the narcissistic movie star Errol Flynn, who has been invited along with his current squeeze, Bette Davis.

The hosts are enraged when they find Patricia in Flynn’s bedroom. To avoid scandal, Hearst and Davies concoct a plan to marry her off quickly — with Arthur as the target. They’ve barely met and don’t get along. Could at this point, Orson Welles’s War of the Worlds broadcast be a matchmaker? No spoilers here.

The result of long gestation, the music of Castle Happy may be said to have originated in Dunn’s childhood when, as he recalls, “I first began to love the creation of musicals when Meredith Willson played a preview of his The Unsinkable Molly Brown on the piano in our home.” Besides a career in geology and project manager, Dunn has written about music (for San Francisco Classical Voice and other publications), and has composed art songs, a film score, incidental music for plays, and chamber works.

The original idea for Castle Happy came from Freed, who taught dramatic literature at Penn State, and has been a theater and film critic. His works include Love me, Fuseli: A Play about Mary Wollstonecraft and her Circle of Friends, Figaro’s Follies — a new adaptation of Beaumarchais’ Figaro plays — and The Merchant of Pittsburg: A Comedy. Freed is a resident of Portland, Oregon, and teaches at Brandman University.

Castle Happy is in two acts with 22 songs, presented in showcase format with a minimal set but staged, costumed, and accompanied by piano. The cast of actor/singers comes from Bay Area companies such as Lamplighters, Island City Opera, 42nd Street Moon, Marin Opera, Pocket Opera, and others. 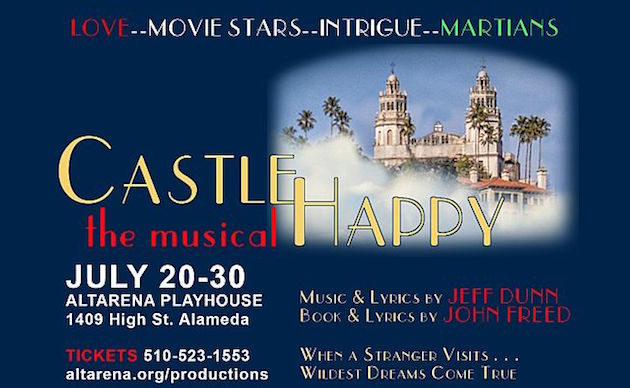