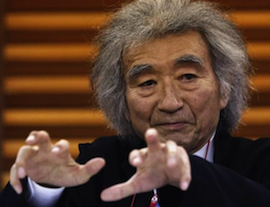 That somebody like me, who has suffered a major illness and underwent surgery, can speak casually about death is proof that I've really recovered. Either that, or I'm really dumb — but please think of me as being recovered and active.

This was Seiji Ozawa's response last week to the news that a music festival in Japan he founded 23 years ago will be renamed as the Seiji Ozawa Matsumoto Festival. It followed a comprable honor, the 1994 naming of a recital hall at the Tanglewood Festival: "That was a little bit like a tombstone."

Ozawa, who turns 79 on Sept. 1, was diagnosed with esophageal cancer in 2010, underwent lower back surgery a year later, and suffered multiple bouts of pneumonia through the middle of last year.

Highlights of Ozawa's career include lengthy runs with the Boston Symphony (as music director), the Vienna State Opera (as principal conductor), orchestras in Japan, the Toronto Symphony, and the San Francisco Symphony (music director, 1969-1976, after Josef Krips and before Edo de Waart).

He couldn't pursue a career as a pianist after suffering an injury playing rugby, his physical conducting style resulted in several injuries, but at least he stayed safe during his robust singles tennis games in Golden Gate Park through recent years — wearing only shorts, against etiquette, but no one ever tried to correct him.