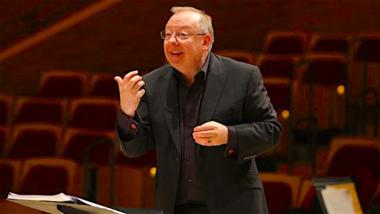 “I am certainly not retiring and I’m in good health,” Nicholas McGegan, 68, reassured Classical Voice when asked about today’s announcement from Philharmonia Baroque, which he has headed for over three decades.

He fine-tuned the statement from the organization, which said he “will retire as music director at the conclusion of the 2019–2020 season ... to become music director laureate after leading America’s foremost early-music ensemble for 35 years.”

McGegan’s comment: “I am stepping back from my responsibilities at PBO but not stepping away. In my new role as music director laureate I will still be able to direct the orchestra each year and continue with some existing projects.”

When asked about specific plans, McGegan connected past and future:

I’d love to do the great Mozart operas again. I did them when I was Principal Guest at Scottish Opera in the 1990s. I hope to keep up my academic contacts, especially at Juilliard and Yale. I find teaching incredibly stimulating and I learn so much from it.

Perhaps there is even a book to be written? There is, of course, a life outside music: I hope to travel but not only for work and to widen my horizons in every way.

Mozart is on McGegan’s mind because he is conducting the PBO “Mozart Magnified” series, opening as soon as tomorrow, running through Oct. 7, with Litaniae Lauretanae, Exsultate, jubilate, and Mass No. 15 in C major, “Coronation Mass.”

McGegan has been involved in a decades-long collaboration with choreographer Mark Morris, notably the premiere performances of Morris’s production of Rameau’s Platée at the Edinburgh Festival, and Handel’s Acis and Galatea and L’Allegro at venues including the Ravinia Festival, the Mostly Mozart Festival in New York, and Cal Performances in Berkeley.

When asked about highlights of his career (so far), two Rameau operas, Platée and Le Temple de la Gloire were on top of McGegan’s list: “I love staged opera and these two very different productions were perfect heaven for me: glorious music, entrancing dancing, great singing and playing, and a lot of wit.”

In the world of Baroque music, McGegan has always represented an alternative to the academic approach, as he once told Classical Voice:

What we don’t do is “what the composer intended.” That’s extremely insulting to all others.

Rather than being as pure as the Virgin Mary, we should probe beneath the skin of music, strive for great performances. Music for me is an emotional and exciting thing, not to be tempered by correctness.

Besides presiding over Philharmonia Baroque for all these years, McGegan won fame by being principal conductor of Sweden’s 18th-century Drottningholm Theater from 1993 to 1996; artistic director and conductor at the Göttingen Handel Festival from 1991 to 2011; and principal guest conductor at Scottish Opera in the 1990s. Guest appearances have brought him to the podium at Covent Garden, San Francisco, Santa Fe, and Washington. He remains principal guest conductor of the Pasadena Symphony.

At PBO, McGegan conducted 981 performances, presenting works by 135 composers. His discography includes more than 100 releases spanning five decades. In the course of recording 50 albums of Handel, McGegan has explored the depths of the composer’s output, including a dozen oratorios and some 20 operas.

Philharmonia Baroque announced that it is “beginning the search for a new music director to build upon McGegan’s legacy of programming and presenting period music at the highest level of artistic integrity.”

SFCV talks to Philharmonia Baroque’s music director about the history of the group and the early music scene.

Stellar programming and superb playing marks a program of Classical works by tried-and-true composers plus one virtual unknown.