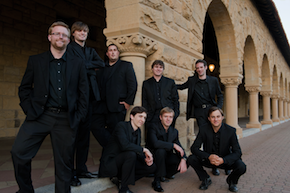 "Contrary to popular imagination, tech workers don't all hop on the Google bus and head home for an evening of video games and chat rooms," Carla Befera advises. "Several spend their off hours perfecting a cappella harmonies, working through Welsh texts, discovering Appalachian hymns, and enjoying the classics."

The founder/CEO/Fairy Godmother of Carla Befera Public Relations speaks more from personal than professional motivation. Her support for Ragazzi Boys Chorus started with the participation of her own son, beginning at age 6 (he is now 23), and she has been fiercely supportive of the group through the years.

That passion is including Continuo, a graduate offshoot of Ragazzi, young men who just wanna sing. Not only that, but as you will see below, they are involved in some cool, even bizarre musical adventures. But first, back to Befera:

Men who hold down day jobs at Google (Daniel Crowley and Calvin Johnson), Apple (Charles Duyk), and a San Francisco start-up called Apporable (Zander MacQuitty) are among the singers of Continuo, a men's a cappella choir formed when these adults found themselves back in their native Bay Area and seeking a choir experience that offered the challenges and bonding they had found as boys in the famed Ragazzi program.

Continuo's current series of concerts, "Ex Corde: The Rhythm of the Land," repeated in Palo Alto on May 31 and in San Francisco on June 1, has some choice selections, from a cross-section of history, geography, and genres.

And, "Guide Me O Thou Great Jehovah," a traditional Appalachian hymn, collaboratively arranged by Ragazzi Continuo, with a back story:

Vance George, director emeritus of San Francisco Symphony Chorus, helped us at two of our rehearsals this season, and when he saw we were performing this, told us this piece was originally brought to the Bay Area when it was performed a cappella at Grace Cathedral by an African American singer visiting from somewhere in Appalachia, and it was transcribed by someone Vance knew.

Vance started performing it with some of the choirs he directed, and Joyce Keil got her hands on it at some point and performed it with Ragazzi's Young Men's Ensemble (high school age group) when some of the current Continuo members were in that group.

And, the one whetting my appetite especially:

* "Zikr," by A.R. Rahman, the composer famous for soundtracks to innumerable Indian films, including Slumdog Millionaire, with Islamic text in Urdu language, based on traditional music of Whirling Dervishes.

Veteran readers of this column may recall my frequent plugs for one the best Rahman soundtracks (of his 170) in the Sufist tradition, "Khawaja Mere Khawaja," from Jodhaa Akbar.