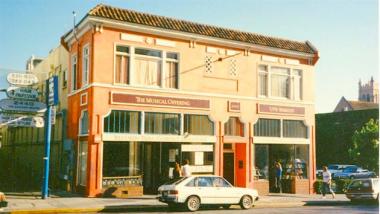 The Musical Offering cafe and classical CD shop, located just south of the UC Berkeley campus at 2430 Bancroft, has long been a haven for early music fans (it’s named for a J.S. Bach composition, after all). Thanks to a recent donation, this home of Bach and Vivaldi CDs is now host to a vast collection of opera LPs as well. About 4,000 of them!

But tonnage isn’t everything. What makes this a goldmine for opera lovers is how impeccably maintained the records are — “minty fresh,” says store manager Nadja Matisoff — and the overall high quality of the collection.

Only a true aficionado could have amassed such gems while simultaneously avoiding the junk that overflows $1 record bins. That expert was the late Charles Robert Rose, an opera critic for Fanfare magazine, host of an opera show on KPFA, and founder of his own record label. “Rose spent 60 years amassing the treasures on these shelves,” said Matisoff. “The comprehensive and thorough pattern of his collecting is true throughout.”

The deities of the LP era are duly represented: Maria Callas, Renata Tebaldi, Montserrat Caballé, Plácido Domingo, etc. Abutting those many-times-reissued artists are uncommon items by singers of a much older vintage. Browse for five minutes and you will find everyone from Adelina Patti to Leontyne Price.

An illustrative example of the depth and scope involved is tenor Richard Tauber. The shelves bow under the weight of 43 albums from this 1920s and 30s star. The Tauber section, along with a few other collector favorites like Josef Schmidt and Miguel Villabella added in, measures about three linear feet. That’s a lot of music by the three tenors, 70 years before that other trio of famous tenors.

For those who love eccentric record covers, appealing oddities beckon from each bin. For instance, there was a Franco Corelli disc on Cetra boasting a Salvador Dalí-esque cover portrait that caught my eye instantly. And, who wouldn’t be curious to hear Cathy Berberian Sings the Beatles?

Complete opera recordings, alphabetized by composer, form a perimeter around the store with some titles featured in multiple editions. Verdi’s La Traviata is represented by no fewer than 33 different sets, including many old broadcasts from Italian radio. Single-artist albums are organized as Rose originally had them, by voice type. The bass/baritone section contains dozens of issues by the likes of Ivar Andresen, Alexander Kipnis, and Ezio Pinza, many containing rare selections you would be hard-pressed to find on CD or a streaming service.

The Musical Offering opened the collection for sales back in October, and they are still unpacking boxes from the enormous hoard. There are plenty of discoveries yet to make, but you might not find much by Spanish tenor Alfredo Kraus. Rose had ten of the early albums Kraus made for the Montilla label and maintained them in great condition. Full disclosure: I couldn’t resist. I bought them all.

Jeffery S. McMillan is Senior Communications Manager for San Francisco Opera. He has written for Opera News, Musical America, and is the author of Delightfulee: The Life and Music of Lee Morgan.

The famed, El Cerrito–based Arhoolie Records turns 50 years old this year, an anniversary that is being celebrated by an enormous roster of fans and artists at Freight & Salvage Coffeehouse in early February. Founder Chris Strachwitz recalls the label’s early days; Taj Mahal and Linda Ronstadt celebrate its triumphs.

Catching Up With Evelyn Herlitzius