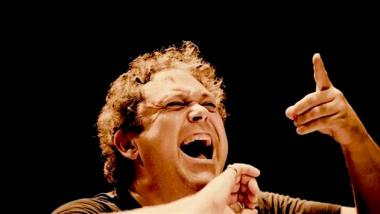 One of the world’s most prominent conductors of early music will succeed another when Richard Egarr becomes the next music director of the Philharmonia Baroque, succeeding Nicholas McGegan.

The news today comes four months after the organization McGegan has headed for 35 years announced that he will become music director laureate after the end of the 2019–2020 season.

PBO Board President Kay Sprinkel Grace and Executive Director Courtney Beck announced Egarr has signed a five-year contract; he will arrive at the start of the 2020–2021 season as music director designate (due to his continuing work as music director of the Academy of Ancient Music), and assume the title of music director beginning in the 2021–2022 season.

There is a noteworthy similarity between the two Englishmen beyond their shared (nonrestrictive) focus on Baroque music: Egarr has been described as “a consummate musician with a wicked sense of fun” and a typical McGegan saying is “Rather than being as pure as the Virgin Mary, we should probe beneath the skin of music, strive for great performances. Music for me is an emotional and exciting thing, not to be tempered by correctness.”

Both men are expats as well: Egarr lives in Amsterdam and McGegan in San Francisco; both constantly traverse the globe, leading orchestras. Egarr’s activity is dizzying; besides harpischord performances and guest conducting, he is music director of the Academy of Ancient Music, principal guest conductor of Residentie Orkest (from 2019–2020), and artistic partner at the Saint Paul Chamber Orchestra (from 2019–2020). Egarr has been on the faculty of the Juilliard School for six years in the Historical Performance Division.

Egarr is well familiar with Philharmonia Baroque, telling SFCV that he has led the orchestra three times over the past seven years, “with huge excitement and pleasure, conducting both their regular concerts all over the Bay Area and their alternative concert series, SESSIONS, which is so much fun. I think we did Corelli The Godfather last time and sort of confused everyone when we opened the program with the theme to the The Godfather.”

Will he live in San Francisco?

Who knows, there are lots of unknowns: Brexit, Trump ... With two small children I really can’t say at this point. Time will tell.

While I currently live in Amsterdam, I look forward to being in San Francisco not only for Philharmonia seasons, but for tours, education programs, as well as collaborations with Juilliard and recordings. There’s a lot I want to accomplish and so much opportunity. With a period-instrument orchestra and chorale, there are so many exciting directions.

Egarr’s official statement about the appointment included this:

I hope to continue the amazing work which Nic has done so far. I also hope to inspire, deepen and develop the repertoire and playing. There is still much to do and new attitudes to bring to the world of historical performance, and I am grateful and overjoyed to be able to continue my work in this field with PBO.”

McGegan has said earlier: “I am stepping back from my responsibilities at PBO but not stepping away. In my new role as music director laureate I will still be able to direct the orchestra each year and continue with some existing projects.”

Harpsichordist Lars Ulrik Mortensen, heard Sunday with the Philharmonia Baroque Orchestra in Berkeley, is an interpretive genius. And, it was little surprise that pairing one of America’s great period orchestras with a harpsichordist of such dramatic flair would produce impressive results.

SFCV talks to Philharmonia Baroque’s music director about the history of the group and the early music scene.