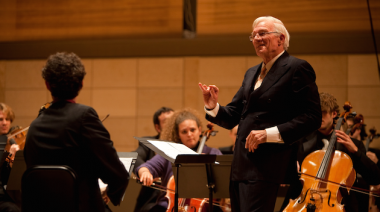 If one were to meet Mark Sokol, one would immediately feel the power of his energy and a commitment to pursue his passion with every fiber of his being. Beethoven is quoted as saying, “Don't only practice your art, but force your way into its secrets, for it and knowledge can raise men to the divine.” Sokol might have written that credo himself as he launched into every project — be it in music, birding, or sports — with total passion and enthusiasm.

Mark heard his first string quartet concert at Tanglewood when he was a month old (the Juilliard Quartet’s first Bartok cycle at Tanglewood), studied the violin with his father from age five, started playing string quartets as soon as possible and tackled his first Beethoven quartet at age nine.

He played quartets throughout high school and into studies at the University of Washington before attending the Juilliard School in New York, violin lessons with Dorothy Delay, and chamber music with Robert Mann.

He enlisted during the Vietnam War, serving in the U.S. Military Academy Band at West Point from 1967 to 1970. There he created the first-ever military string quartet as a substitute for piccolo playing at reveille at 4:30 a.m. This USMA String Quartet traveled the country and concluded its service with a critically acclaimed concert at Carnegie Hall.

From 1970 to 1971 he was a violinist with the Creative Associates at SUNY Buffalo specializing in the performance of new music under the direction of Lukas Foss. In 1971, with violinist Andrew Jennings, violist John Kochanowski, and cellist Norman Fischer, Sokol founded the Concord String Quartet which captivated audiences throughout the United States, Europe, and Africa. They specialized initially in contemporary music but quickly became exponents of all quartet styles, especially cycles of the complete quartets of Bartók (18 cycles) and Beethoven (36).

After the quartet disbanded, Sokol moved to Sebastopol, CA, and began teaching at the San Francisco Conservatory of Music as chair of the chamber music department. Students remember the force of his intense and committed teaching style. Concurrently he spent many summers teaching at the Tanglewood Music Center (Lenox, MA) and Kneisel Hall Chamber Music School (Blue Hill, ME).

Next to music, Mark was most enthusiastic about birding. His wife and closest companion of 27 years Elaine (Laney) Langlois shared this passion for birding and together they traveled the New World. On one expedition he called a friend in Houston asking to spend the night. Arriving late he explained that he and Laney had found the rare Kelp Gull they were seeking near Galveston Bay but, not completely satisfied with the sighting, he announced that they would be leaving significantly before dawn so they could see it again with different light on the plumage.

After finding every common and most rare birds in North America he proceeded to spend the better part of the last 20 summers and winters in South America looking for every known (and some unknown) birds in difficult terrain and extremely unusual locations. Helicopter flights, motorboat and canoe trips, followed by a high-altitude trek were not unusual. Mark may have achieved his long-time goal to see more birds in the New World than anyone else.

Donations can be made in Mark Sokol’s name to the World Wildlife Fund, the National Audubon Society, and the Walter W. Naumburg Foundation.