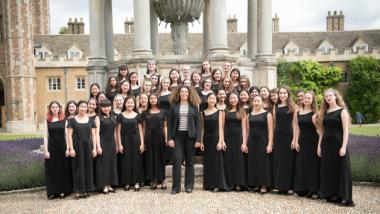 The story of what’s programmed by top orchestras, opera houses, and ensembles around the country continues to be defined by what’s not on the program. The 2019-20 season from the San Francisco Girls Chorus, announced yesterday, is a welcome and refreshing swerve from the usual.

Not that it’s anything new for the SF Girls Chorus. Taking the 100th anniversary of the passing of the 19th Amendment as a jumping-off point, the Chorus’s upcoming season celebrates the empowerment of women. Conductor and SFGC Artistic Director Valérie Sainte-Agathe makes the case boldly: “Through music, we possess the unique opportunity to impact change in the world …. We are excited to celebrate powerful women.”

The season begins on Oct. 19 with a program centered around Sister Juana Inés de la Cruz, a 17th-century nun and Baroque composer noted for her early feminist writings. The explicitly feminist thread continues through SFGC’s February concert, in collaboration with Berkeley Ballet Theater; two new works by composers Angélica Negrón and Aviya Kopelman will explore the legacy of the American women’s suffrage movement. Ending on June 16, the season’s final program is a sneak peek of what’s to come — a preview of composer Matthew Welch’s new opera, Tomorrow’s Memories, based on the diaries of Filipina immigrant Angeles Monrayo, slated for a full premiere during the 2020-21 season.

Along the way, look for the SF Girls Chorus in an array of special appearances and collaborative projects around the Bay Area. Highlights include Humperdinck’s Hansel and Gretel at SF Opera, performances with Kronos Quartet, the Chorus’s 41st Season Gala, and Mahler’s Symphony of a Thousand with MTT and the SF Symphony. And in keeping with tradition, the SF Girls Chorus returns to Davies Symphony Hall in December for a program of holiday carols, this year featuring vocal ensemble Clerestory and percussion-guitar duo The Living Earth Show.

Ahead of the start of their official season, catch the SF Girls Chorus at the reopening of the Presidio Theatre on Sept. 21 or at the Hardly Strictly Bluegrass Festival with Kronos Quartet on Oct. 4.

Tickets for SFGC’s subscription season are available beginning Sept. 6 through www.cityboxoffice.com or by phone at 415-392-4400.

The Refurbished Presidio Theatre Opens With a Pop-Up Orchestra

The 40th-anniversary fete will raise funds for scholarship and education programs.

Congratulations to the winners of our annual Best of the Bay reader poll.