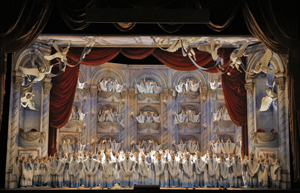 So I asked Premier Chorister Tom Reed how in hell — excuse the language — the chorus can switch from angels to revelers to devils to anachronistic Greek café society swells courting Helen to angels again. Here’s his backstage confidential:

The audience may marvel at how the chorus manages to appear in one scene dressed a certain way, and then appear in another scene just minutes later dressed in a completely different costume. For example, we start the opera as a choir of heavenly angels, then do a quick costume change and become a mob of Easter revelers. And at the end of the opera we go from formally dressed theater guests back into angels.

Let’s examine the quick change in the third act. When the curtain drops after the Helen of Troy scene, we simply dash upstage to the patch where our angel costumes are waiting on racks in alphabetical order. We drop off our props on our way to the racks where our dressers await. Of course there are 90 of us, and only a few dressers, but we share.

In the confined space we rip off our tailcoats with remarkably few injuries, and toss our angel gowns over the rest of our Helen of Troy scene costumes. The robes go on like a hospital gown with the opening in the back that dressers close with velcro as they move from chorister to chorister. Then the attached white arm drapes are carefully adjusted so they drape from the shoulders and cross in front, (never under the arms!) with the shorter extensions on the outside right and left.

Next we move effortlessly through the mob to a central table where our crowns and masks await, laid out in alphabetical order next to stickers that display our names. First the mask goes on. Then comes the trick of pulling the veil up over the head before the crown goes on. There are no mirrors and it’s hard to feel the veil while wearing white gloves, so it may require some assistance.

Once on, the crown presses the mask firmly into the face, so now you have a simple decision to make. Would you prefer to breathe through your nose, or blink your eyes? If adjusted so your eyes can still blink, the mask tends to pinch your nostrils closed, which can affect your vocal production negatively. If adjusted for breathing, the mask tends to hold your eyelids shut when you blink. So it’s not an unimportant decision. We don’t bother taking the time to change our makeup, even though the Troy scene required tan faces and the Angel scene will require white faces. We get around this by wearing both colors at once in the Troy scene. That’s right. The centers of our faces are tan, and the peripheries are white. We leave it to the lighting department to make it look natural. And later when we put on our white angel masks over the tanned parts, voila! White-faced angels! See? Nothing to it!

Once dressed as angels, we must be carefully examined by a dresser to make sure that all the drapes are correct. Then we move downstage and wait for the "go" while the stage hands complete the scene change. The set is dominated by tall, movable towers that can be rotated to reveal different scenes to the audience — a beautiful “heavenly” side painted in sky blue with fluffy clouds, in which the chorus of angels perch in boxes, and a burnt out “hellish” side populated by crimson demons. So while the towers are being positioned with the heavenly side toward the audience, we make ready for the final dash.

Then it’s just a simple matter of quickly getting to your assigned place on stage without falling down and being trampled. If you happen to be one of the lucky ones who get to occupy a box high above the stage in one of the heavenly towers, you must be prepared for a climb. First you search for your tower. In the dark they all look the same, except for a number scribbled on the back of the door in white chalk, which hopefully hasn’t been smudged.

Then you squeeze through the doorway and climb the narrow winding steps in the dark without tripping on your long gown or snagging your arm drapes on anything. Each tower has three heavenly boxes interspersed with two hellish boxes on the other side. The upper boxes can only be reached by passing through all the boxes below. I just happen to be in the highest heavenly box, so on the way up I first pass through heaven, then hell, then heaven, and then hell again before reaching the highest heights of heaven three stories above the stage floor.

It helps to memorize the staircase, because you can’t really see or feel much from inside your costume, which amounts to a portable isolation tank. Profanity is frowned upon, but hearing it does help those fighting their way up behind you feel less alone. In the tight space, the ascent is best accomplished by hunching over and holding your crown with one hand while lifting your robes with the other. With no hand free to open the tarps that you encounter at the entrance and exit of each box, simply use your crowned head as a battering ram to slip past the tarps toreador-style with minimal entanglement. Think of each tarp as a milestone rather than a dreaded obstacle.

Once everyone reaches their assigned places — three choristers per box — we fasten the tarps behind us. The lighting department has placed tape marks on the floor indicating where we should stand. If you step forward beyond the tape you will not be lighted properly. And you certainly wouldn’t want to be a dark angel among the heavenly host. But staying behind the tape puts you at high risk of snagging your crown in the box curtains, so hold absolutely still!

Meanwhile dressers down on the stage floor check us out and shout up instructions to everyone whose crown or drapes went askew during the ascent from hell. At that point one naturally takes a moment to think about the music we are about to sing, rather than the maddening itch under the mask, which cannot be scratched. This will be the third time in the opera that we will sing the lovely “Ave” chorus, and so to keep it fun, composer Arrigo Boito decided to write three different versions of it that contain just a few variables — over 30 of them, actually — making it an ongoing challenge to keep track of which version we sing when.

Boito’s little teasers include note changes and variable texts such as, “emana emana” the first time, versus “emana un verso” the second and third time, and “d'amor, d'amor” the first and third time, versus “supremo amor” the second time. And he thoughtfully divided us into Chorus 1 and Chorus 2 so that we wouldn’t all be singing the same words at the same time. No cheating by relying on others. And then, before you’ve caught your breath, stage management shouts “CLEAR!” Dressers make a mad dash to clear the stage just as the curtain rises, leaving us standing there looking, well ... heavenly! Now honestly, could anything be easier than that?!

Whoa! And Reed has been doing this decathlon-in-three-hours with the San Francisco Opera Chorus since 1975, singing all the way, appearing in more than 2,600 performances of over 140 operas. Robertson, the great chorus master, has been weaving his magic since 1987; he is on his third Mefistofele cycle. I am constantly astonished by most reviews merely mentioning that, yes, there was a chorus — if at all. The singer’s lot is not a happy one, except for the knowledge of performing on this level, having overcome obstacles no church or symphony chorus ever encounters.

From Istanbul comes a response: Former SFO chorister Alexandra Ivanoff says: “And in the old days we had to breathe in the toxic fumes of fake fog as well. Tom Reed’s explanation will lay to rest the notion that an opera chorus job is a piece of cake.”