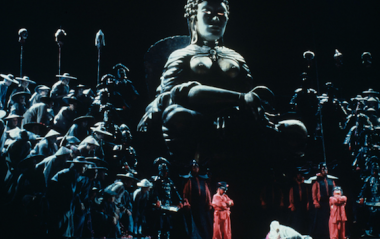 Note in your listening calendar: At 8 p.m. PST on Dec. 7, KDFC-FM will broadcast San Francisco Opera's 1977 live recording of Puccini's Turandot.Why is it noteworthy?

Because this production, the premiere attended by Prince Charles (still single), combined the company debut of conductor Riccardo Chailly, role debuts of Montserrat Caballé as Turandot, Luciano Pavarotti as Calaf (before the tenor's "Nessun dorma" went around, and around, the world), and Leona Mitchell as Liù.

It was an extraordinary performance, Pavarotti (age 42) and Caballe both at the height of their powers, and Chailly, at 24, in his first important conducting appearance anywhere. It also marked one of Jean-Pierre Ponnelle's most dramatic productions for Strasbourg's Opéra du Rhin, with a giant statue dominating the finale, and signaling Turandot's change of heart.

The broadcast intermission has a joint interview with Caballe and Pavarotti, discussing their careers, their families, getting advice from Maria Callas about opera roles to perform.

A second interview is with Chailly, whose first job, at age 20, was assistant to Claudio Abbado at La Scala, although he did make his conducting debut there until a year after the SFO Turandot. In the interview, Chailly spoke with palpable excitement about making his debut here, expressing hope that General Director Kurt Herbert Adler will consider him for a future assignment.

Unfortunately that never happened, Chailly going on to international fame, heading — among others — Berlin Radio Symphony Orchestra, Teatro Comunale of Bologna, the Concertgebouw, Amsterdam, Leipzig Gewandhaus Orchestra and Leipzig Opera. Still, a third of a century after that fabled Turandot, at age 57, Chailly returned to San Francisco, but appeared in Davies Symphony Hall, not the Opera House, leading Gewandhausorchester on tour.