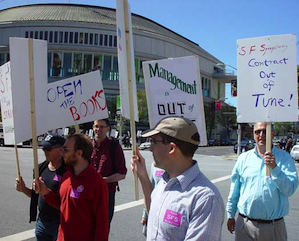 SFS Strike Through a Glass, Novelistically

Working on coverage of the S.F. Symphony strike, a scene came to mind from a book read decades ago. I don't have a copy now of Thornton Wilder's Heaven's My Destiny, so this is an approximation through the haze of time.

A young, naive, well-meaning Bible salesman encounters a boy, perhaps 6 years old, playing outside his home. The man says hello to the kid, hoping to speak to the child's parents. The boy kicks the man in the shin, starts screaming, and when his mother runs out from the house, the boy points at the man at yells: "He kicked me!"

Why is this memory popping up now in our town? Time and again during the past two weeks of the sudden, bewildering SFS strike, I sensed in the language and responses from the two camps in the labor dispute that they both experience the feeling of the wronged man's surprise and bewilderment.

I am not alone in this, as supported by a San Francisco Chronicle article, with the meaningful headline of "Symphony strike has both sides mystified."

Ask management for comment on statements from the Players' Committee, and you get the Why do they say we kicked them? response. For example, the union claim of an "unprecedented pension freeze" nonplussed the SFS spokesman, who was confused with the use of "freeze." He kicked whom?

It turns out that the complaint refers to no increase in the $74,000 maximum for pensions, whereas pension freeze means no future earning of benefits. Complaints notwithstanding, apparently management's offer continues the pension benefit at the current level.

Union statements contain numerous "they kicked us" complaints, perhaps most prominently in the open letter to venues where they were supposed to play during the tour:

The Musicians of the San Francisco Symphony would like to express our deep frustration and disappointment at our Management’s cancellation of our East Coast tour.

During the negotiations that preceded our planned East Coast tour, the San Francisco Symphony Musicians consistently stated that we would not embark on this tour without a contract in place. We have never done so before and did not want to set that dangerous precedent at this time.

So, "we told management we wouldn't go without a contract" and now they canceled the tour because we didn't have a contract — to "our frustration and disappointment."

Surprising leaps of logic are found in many places, for example, in the open letter to the Board of Governors:

"We consider ourselves very fortunate to share an incredible partnership with each of you ... As we have stated many times, the SFS Board is among the best in the world and we are grateful for your commitment to the orchestra." However: "We are concerned that the SFS has lost sight of its artistic mission."

What makes the difference between a board that's "among the best" and the administration (which implements board policy) that "lost sight"? The claim is that the administration asks "musicians to now [1] freeze their wages, [2] cut benefits and [3] slide backwards artistically and economically." This stance is maintained even after management offered an increase, not freeze, in wages; did not demonstrably cut benefits; and has moved forward, not backward, artistically and economically, according to the very same letter.

Note Nicole Cash's euphoric acknowledgment how she has had "the pleasure of making music with some of the finest musicians in the world ... and the joy of making this music for the best, most appreciative, and generous audiences in the world," contrasted with her now "feeling like fish out of water ... ever since we musicians were forced by management to go on strike."

What caused that 180 degree turn? Management's failure "to justify bonuses and raises for uppermost management while crying poor when it comes to basic cost-of-living raises and pension for the people who are the very core of this institution."

Or, ask either side about the musicians' complaint that work rules are being changed, and you get say what?! Not a single standard collective bargaining agreement item, such as scheduling and duration of rehearsals and concerts, touring conditions, schedules and per diems, run-out frequency, and so on, is mentioned, and management claims no knowledge of any changes being contemplated. The musicians, in turn, refer to management for any information, while insisting that changes are lurking in the dark to be imposed. So who kicked whom?

It's all sadly and needlessly murky and showing no sign of an effort to improve communications and a restore a relationship, which went from years of high to very, very low in a few days.