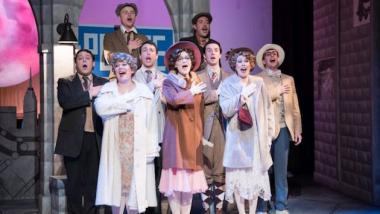 42nd Street Moon, in the business of “presenting classic and rarely performed musical works,” is fulfilling the second part of its dual mission by producing Stephen Sondheim’s Saturday Night. It is a musical that’s not a classic, but definitely interesting and certainly “rarely performed.”

The greatest living author of musicals was an unknown but brilliantly promising 23-year-old in 1953, already the author of theater and TV scripts, when he turned Julius and Philip Epstein’s Front Porch in Flatbush into a musical. It was to open on Broadway in the 1954–1955 season, but the death of the producer prevented it, and the off-Broadway premiere had to wait until 1980.

Whatever Sondheim’s feelings might have been at the time, he looks back at the missed Broadway debut calmly and does not wish to fix it up:

“I don’t have any emotional reaction to Saturday Night at all except fondness. It’s not bad stuff for a 23-year-old. There are some things that embarrass me so much in the lyrics — the missed accents, the obvious jokes. But I decided, leave it. It’s my baby pictures. You don’t touch up a baby picture — you’re a baby!”

The meandering story of friends spending a Saturday night in 1929 Brooklyn now has its Bay Area professional premiere, 42nd Street Moon serving up “some lovely songs and many flashes of the genius that Sondheim was soon to become.”

The production is directed by Ryan Weible and choreographed by Allison Paraiso-Silicani, with music direction by Daniel Thomas at the keyboard.

The story is of a group of Brooklyn boys trying to find something to do on a Saturday night... and make good in the stock market. (Remember the setting of the play: it’s 1929, with the Crash just around the corner.)

One of the buddies, Gene (Nikita Burshteyn), is so eager to climb the social ladder and impress his sweetheart Helen (Amie Shapiro) that he invests his friends’ money in a swank apartment near the Brooklyn Bridge and sells a friend’s auto.

“Saturday Night is a treat to produce for many reasons,” say the company executive directors. “First and foremost is the music and lyrics of a 23-year-old Stephen Sondheim. Even though the story and songs are relatively lighthearted (especially considering some of the material Mr. Sondheim tackled later in his career), there is a maturity and wit in his music that outstrips the work of composers with decades of experience on Broadway.

“The show itself is also a treat for audiences — the characters are endearing, and many are hopelessly romantic and optimistic. You’ll leave the theater wanting to share their joy for life and love — something that is sorely needed in today’s often cynical and polarized world.”

You Can 'Hear a Waltz' at 42nd Street Moon