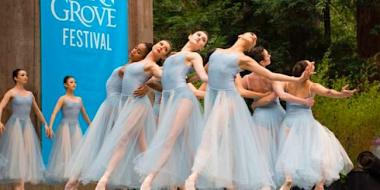 On Aug. 18, at the final concert of the Stern Grove Festival’s 82nd season, there will be a generational change in leadership as Dr. Douglas Goldman retires as chairman. The baton will pass to his 33-year-old twin sons Matthew Goldman (now vice chairman, to become chairman) and Jason E. Goldman (now treasurer, to become vice chairman).

Thus, the longest running, major, admission-free music festival in the country will remain in the care of the San Francisco family, descended from Levi Strauss & Co. founders, who gave the Grove to the city.

Between the foundation of Levi Strauss & Co. in 1853, the beginning of the festival in 1938, and today, there is a rich history of the beautiful venue for the concerts, with its 100-year-old eucalyptus trees and excellent outdoor acoustics, now drawing an audience of some 100,000 each year.

It was Rosalie Meyer Stern, widow of Levi Strauss & Co. president Sigmund Stern (himself son of Levi Strauss co-founder and Strauss’s brother-in-law David Stern), who purchased the land that became Sigmund Stern Grove and gave it as a gift to the city of San Francisco in 1931, in memory of her husband.

Rosalie Stern was president of the SF Recreation Commission at the time she donated the Grove, and she stipulated that the land be preserved as a public park to be used for concerts and recreation.

Stern Grove was dedicated on June 4, 1932, and two weeks later, the San Francisco Symphony gave a free concert there. Rosalie Stern also formed the Stern Grove Festival Association in 1938 with the purpose of ensuring that all future concerts would be free to the public. She was the head of the association until her death, in 1956.

There is also important involvement of the Haas family in another connection, as Walter Haas Sr. ran Levi’s from 1928 to 1955.

“Three generations of mothers — my mother, my grandmother, my great-grandmother — preceded me as chairs of the Stern Grove Festival Association,” reflects Dr. Goldman on the past.

“It has truly been both an honor and a privilege to follow three strong, vibrant women who committed their lives to giving back to the community. While I have been fond of saying that ‘I broke the glass ceiling,’ I have been very conscious of the opportunity to create change for the purpose of making the festival more attractive to more people, while maintaining its core elements which have created its history and its strength.

“Now, after 24 years, it is time for a new generation to maintain the core, while creating the excitement. In keeping with its great tradition, I am turning over the reins to the fifth generation to be in charge of this special jewel in the crown of San Francisco. I am sure that my sons, Matthew and Jason, will do all that my family and the community hope they will do. One day in the future, an even more vibrant Stern Grove Festival will welcome the sixth generation of our family to take it into the future!”

The announcement from the festival association notes that the Goldman sons are “two millennials (both men are 33) who will step up heralding a new era for The Festival and San Francisco.”

Festival Executive Director Bob Fiedler says the transition “marks the end of a truly exciting era for the Festival. Dr. Goldman has really helped to improve and modernize the festival during his tenure; from expanding the scope of the festival’s programs to spearheading the $15 million renovation of the Grove, his vision and passion for the festival have made an indelible impact on this treasured San Francisco tradition.”

Incoming chairman Matthew Goldman recognizes that Dr. Goldman’s legacy is “a lot to live up to — I’m excited to work with the board and staff to build on his many contributions and guide the festival into the next decade and beyond.”

Stern Grove Still Grooving After All These Years

Here’s a way to shake up the usual and hear a broad variety of great music at the same time.