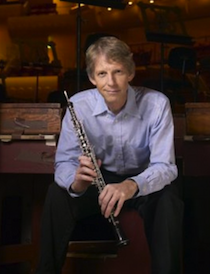 [An announcement from the S.F. Symphony on Thursday said Bennett died. Apparently, he did not regain consciousness after taken to the hospital Saturday night.]

William Bennett, struck by a cerebral hemorrhage Saturday night in Davies Symphony Hall, is still in intensive care at the time of this report, in guarded condition.

The Symphony's principal oboist had just started his solo in the Richard Strauss Oboe Concerto, completing the famously difficult 57-measure opening phrase, when he fell to the floor.

His wife, a physician, immediately came to his side, paramedics arrived about 6 minutes later, and Bennett was taken to the hospital in an ambulance.

The audience heard an announcement about the concert to be paused, but it turned into an early and longer than usual intermission. At 9 p.m, the concert resumed with a performance of Mendelssohn's Symphony No. 1, a bright, zestful work, conducted by Yan Pascal Tortelier, and performed with special dedication by the musicians under adverse circumstances.

"Many thanks to all of you who were able to keep calm in a horrible situation and carry on with the second half of the concert," Rebecca Blum, orchestra personnel manager, e-mailed the musicians after the concert. "Please keep Bill and his family in your thoughts and prayers."

Oliver Theil, SFS director of communication, wrote: "Bill is a brilliant musician and wonderful colleague and our thoughts and best wishes are with him and the entire Bennett family. Any cards or well-wishes can be dropped off in person at the Symphony Box Office or sent to Davies Symphony Hall, 201 Van Ness Ave., S.F., CA 94102."

Bennett, 56, has been with the orchestra since 1979, was named to the Edo de Waart Chair as principal oboist in 1987. He was diagnosed with tonsil cancer in 2004, underwent nine months of radiation and chemotherapy, returning to the orchestra the next summer.

Besides many appearances as soloist here and elsewhere, Bennett has made several recordings, and is frequently featured in his own realizations/transcriptions and orchestrations of such works as the lost Beethoven Concerto and music by Debussy, Ellington, and Pasculli.

He is on the faculty of the San Francisco Conservatory of Music; one reason for his wife being in the audience Saturday was that she accompanied several of his students to the concert.

Robert Commanday commented on Thursday, when Bennett's death was announced :

It was evident early in William Bennett's 26 years as the San Francisco Symphony's principal oboe that he was a star of that orchestra. His artistry, his style, the grace and lyricism of his playing were such that it had to have been influential in the ensemble, absorbed by his colleagues, yes, and catching the imagination of the conductors. It certainly did that out front.

When we would encounter him in his commute, on BART, his face was as always, like his playing, wreathed in a smile. He talked about anything but himself, oboe repertory, the satisfying performance that night, about his teacher (and predecessor in his chair in the orchestra), urging that an article be written about Marc Lifschey, not about himself.

Bill will be with that orchestra for a long time, whoever sits in the Edo de Waart chair. As a colleague of his said two days ago, he was a star on the stage and off. I know that when I hear a oboe solo coming up, I'll be hearing Bill play it, his style, his sound. It'll be the Bill Bennett Chair.