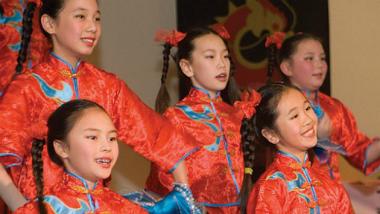 San Francisco Symphony's previous 15 Chinese New Year Concerts were about culture, tradition, an ethnic variety show, lots of fun for children (of all ages), and raising funds for community outreach and education programs, which provide music education to some 75,000 Bay Area school children each year.

At the same time, these events have also had some memorable musical highlights, such as the local debut of pianist Yuja Wang, who has been returning to the main stage here frequently as she is girding the globe with triumphant concerts.

Hoopla, fun, and musical discovery also will mix for the next edition, the Feb. 13 concert in Davies Hall, welcoming the Year of the Monkey, which runs Feb. 8 through Jan. 27, 2017, and for this cycle it's called the Fire Monkey or Red Monkey.

Mei-Ann Chen, music director of the Memphis Symphony, leads the orchestra. A free festival reception, beginning at 2 p.m., precedes the concert, with lion dancers, arts and crafts, and refreshments. The concert is followed by a fundraising Imperial Dinner, where attendance costs from $375 to $1,000. Concert ticket prices range from $30 to $74.

A special program offering is the fast-rising young soprano Pureum Jo, making both her S.F. Symphony debut on Feb. 13 and San Francisco Opera debut in the fall world premiere of Bright Sheng's Dream of the Red Chamber as Dai Yu, the opera's heroine. The Juilliard graduate and former Houston Grand Opera Studio Artist will perform in Davies Hall the aria opening the second act of the opera.

Sean Waugh, of S.F. Opera's Artistic Department, told SFCV that in the opera's story, Dai Yu is the crimson pearl flower who is reincarnated as an orphan girl in order to be with the Divine Stone, who is reincarnated on Earth as Bao Yu, her would-be lover, the lead tenor. Yet, when they both are sent down from Heaven, the circumstances in which they are born does not favor their hopes to be together. The lyrics of her aria, in which she mourns the impending marriage of Bao Yu to Bao Chai, the lead mezzo, by burying flower petals: