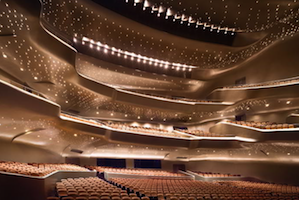 San Francisco's Opera, Symphony, and Conservatory os Music have long made advances to China, with its potential audience of 1.35 billion, but the news — in the The New York Times yesterday which prompted the column item above — ratchets the subject to a national/international level:

This week IMG Artists, a major representative of classical musicians in the West, announced a new partnership with the China Arts and Entertainment Group, a huge arts and entertainment company in China.

Their new venture, called Sino American Global Entertainment, aims to create new paths for performances and marketing in both countries.

"I believe China is the fastest-growing classical music market," Zhang Yu, the chairman of the board and president of the China Arts and Entertainment Group, said in an interview, noting that tens of millions of children in China are learning to play the piano or violin, and that new theaters and concert halls are being built throughout the nation.

Jerry Inzerillo, the president and chief executive officer of IMG Artists, said that he hoped the new venture would be able to present some of the major talent emerging from China in the West, and to present more western musicians in China, where he said the growing audience for classical music was generally much younger than audiences are in America and Europe.

Asked what some of the joint ventures first projects might be, Mr. Zhang said, "I think first we need to get married, and then we will have children."