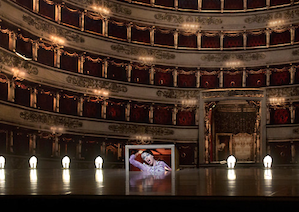 The Tempest and Much More From the Met

High-definition transmissions live to local movie theaters from the Metropolitan Opera and major opera houses in Europe are the new normal for enjoying the genre.

The current seventh season of Met: Live in HD is showing in 1,900 theaters in 60 countries. Live showing are on Saturday, beginning at 9:55 a.m. Pacific time for most operas; encore presentations are on Wednesday afternoons 18 days after the live exhibitions.

The next event in the Met series is the Nov. 10 screening of Thomas Adès' The Tempest, with the composer conducting his opera based on Shakespeare's play.

Instead of the island setting of the play, Canadian director Robert Lepage, responsible for the Met's recent Wagner Ring, has placed the production in the interior of 18th-century La Scala opera house in this staging.

The New York Times music critic Anthony Tomassini called the work "one of the most inspired, audacious and personal operas to have come along in years." Martin Berheimer, in The Financial Times, was more restrained: "The sprawling Tempest ensemble performed with rare virtuosity predicated on virtue. Adès’ orchestral magnitude and Meredith Oakes’ first clever, eventually cloying rhymes probably precluded verbal clarity. Fortunately, text projections at the base of the set minimized the problem, reinforcing mime over matter."

Next up is La Clemenza di Tito, written by Mozart in 1791, the last year of his life. It is a dramatic opera about intrigue and political struggle in ancient Rome. Giuseppe Filianoti sings the title role, the production also features mezzo Elina Garanca as Sesto (a role originally written for a castrato) amd soprano Barbara Frittoli as Vitellia.

Verdi's 1859 Un Ballo in Maschera follows, in director David Alden’s dreamlike setting for a story of jealousy and vengeance. Marcelo Álvarez stars as the conflicted king; Sondra Radvanovsky is Amelia, the object of his secret passion; and Dmitri Hvorostovsky is her suspicious husband. Stephanie Blythe sings the role of the fortune-teller Ulrica.