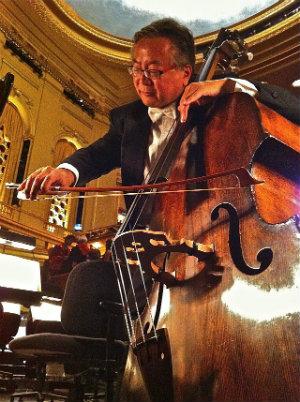 View of the Meistersinger Marathon from the Pit

Die Meistersinger von Nürnberg, the longest opera in the standard repertoire, runs nearly six hours: not easy for the audience, but its five hours of music (in the current uncut version, exclusive of intermissions) is much harder on the singers and, especially, the musicians in the orchestra.

When it was produced in Chicago recently, there was a report of a musician's wife in the audience "with a bag full of sandwiches and a thermos to take to her husband at intermissions - she said that before they worked this out, he was entirely dehydrated and totally wasted after each performance."

To find out what it's like in the War Memorial during the current run, I asked one of the orchestra's prominent veterans, composer and double bass player Shinji Eshima, and the response came with Eshima's usual straight talk:

There are a few musicians who opt out (unpaid) as they cannot physically last the duration of this work. You have to plan when to eat too as the start time is earlier and you need to have energy and focus for six hours. The "coffee volunteers" put out extra snacks too during our intermissions to keep us going. You will see others stretching as they try to stay loose.

On the other hand, the opportunity to play such great music is rare. We have a guest horn player for instance, one of the most highly regarded studio musicians in L.A., who is commuting up here just for the experience of playing this great score. It is a testament to the Bay Area that it supports a company enough that it can be produced. The costs are enormous but then so are the rewards.

There is one musician who does the stretching (and much else), holding all the music together, and that's the conductor, Sir Mark Elder. Eshima's experience of the music director: "Although his tempi are difficult, his intellect, insights, and passion for the work are obvious. When an orchestra has this kind of respect, they play beyond the challenges."

I ran into controversy and (to use a mild word) negativity when asking opera lists and Facebook sites about something Eshima said: "Orchestras in Europe often have a whole new band come in for the last act." So far, emphatic denial of that in all responses, but the question remains open: Is anything like that being done?

While Meistersinger is recognized by Guinness World Records as "the longest of commonly performed operas," what about long works that are not part of "standard repertoire"?

Examples include Hungarian composer Gabriel von Wayditch's 8 1/2-hour The Heretics (with an orchestral score of 2,850 pages), and the probable winner: The Life and Times of Joseph Stalin, performed at the Brooklyn Academy of Music in 1973, which ran over 13 1/2 hours. Produced by Robert Wilson, the opera includes music by Alan Lloyd, Igor Demjen, Julie Weber, and Michael Galasso. Speaking of Wilson, his famous production of Philip Glass' Einstein on the Beach is, at five hours, the longest opera without an intermission (but with "knee plays" between acts, during which the audience encouraged to come and go).