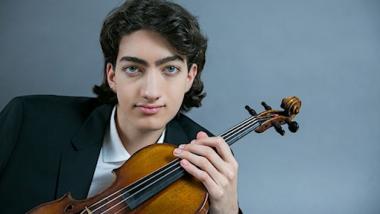 At age 20, Los Altos’s Stephen Waarts has a collection of awards and honors that could make a violinist three times his age blush. Last week, Waarts — a San Francisco Conservatory and Curtis Institute alum — put a unique cherry atop his amazing musical sundae: an Avery Fisher Career Grant, a $25,000 award given this year to three young musicians and the Dover Quartet.

Both Waarts and the Dover Quartet — which did not participate in the  award event because it’s on a European tour — have been associated with [email protected], Waarts is scheduled to participate this summer for the fifth time.

Emailing today from Germany, where he is working on a master’s degree at the Kronberg Academy, Waarts wrote: “I was very pleasantly surprised to receive the award and am grateful both for the committee’s faith in me and the opportunities that the award will bring,” adding about the day’s big basketball game in Oklahoma City: “Rooting for the Warriors from afar.”