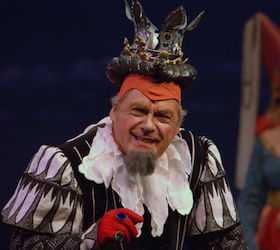 Accepting the appointment, Williams said "thanks to retiring Artistic Director Barbara Heroux, the Company is now in great shape. It's going to be a challenge to fill her shoes. My goal is to reach the Lamplighters' 75th anniversary in even stronger shape than we are now.”

Heroux steps down from that position at the end of the current 60th season. She has been a Lamplighters company member since 1974 with 13 of those years in a management role. She will concentrate on her other positions as stage director for the Lamplighters and other companies around the Bay Area, and as Executive Director of Volti, a professional choir based in San Francisco. She said "I’ll always be a Lamplighter – you don’t resign from your family! – but it’s time for somebody else to take the reins, somebody with the passion and energy to take this wonderful company to its 70th anniversary and beyond."

Lamplighters was founded in 1952, and is now recognized as one of the world’s pre-eminent Gilbert & Sullivan companies. The company's repertoire includes all the surviving G&S works, as well as comic operas and classic musicals by other composers.