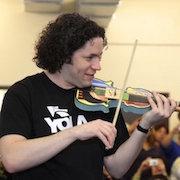 It would be sensational if there were a program that through music opened a world of opportunity for young kids and their families in underserved communities. It would be like a dream come true if that program not only launched a future generation of music creators and appreciators, but also ignited the hearts and minds of its students to pursue prize-worthy careers in the arts, science, political activism, social justice, and other fields.

Well, there is such a program.

Originating in Venezuela and practiced worldwide, El Sistema is a proven music program that grabs preschool-age children and nurtures them into adolescents who adore music, teens burning with desire to perform and learn in ensembles, and occasionally, internationally recognized musicians who are well known to Bay Area audiences, like conductor Gustavo Dudamel.

As the chief conductor of Simón Bolívar Symphony Orchestra of Venezuela and the Los Angeles Philharmonic, Dudamel has developed a habit of appearing regularly in the Bay Area, most often presented by Cal Performances at the University of California, Berkeley. Residencies, workshops and performances at Zellerbach Hall or last year’s rousing rendition of Beethoven’s Ninth Symphony at the Greek Theatre have endeared local audiences to his rambunctious podium style and his ability to draw heart-stirring performances from musicians.

Most audiences know of Dudamel’s upbringing in the Venezuelan city of Barquisimeto, where enrollment at a young age in an El Sistema center, known as a “nucleo,” pulled him off crime-filled streets. Natural talent — for making music, but also for charismatic leadership and communicating his passion to artists of any age and experience — led Dudamel to worldwide acclaim as a conductor and instructor.

So it’s no surprise that Dudamel is today a key figure in the Los Angeles Philharmonic’s outreach program, Youth Orchestra Los Angeles (YOLA), which was founded in 2007 and models itself on El Sistema’s educational approach to music. The program serves 750 students, ages 6–18, in three communities in L.A. and includes intensive after-school orchestral instruction, classes in music creativity and singing, ensemble rehearsals, academic tutoring, and more. The three initiatives, YOLA at EXPO Center, YOLA at HOLA, and YOLA at LACSHA, each have orchestras with members that perform at Walt Disney Concert Hall and the Hollywood Bowl. Coming to Oakland Oct. 30 at the end of the orchestra’s first-ever tour in honor of YOLA’s tenth anniversary, Dudamel will lead musicians age 12–18 in a 3 p.m. performance of works by Bernstein, Beethoven, Brahms, Dvořák, and John Williams at the Paramount Theatre. Tickets for the 45-minute, family-friendly concert are $5.

If the low ticket price to see a world-class conductor is surprising — it shouldn’t be, given that YOLA provides instruments and music and academic instruction at no cost to its students and extends that philosophy to pricing that allows people of all economic levels to attend.

But Dudamel’s comments in a recent email about YOLA do strike an unexpected note when he speaks most urgently not of what he gives to the students, but of what he receives. “The YOLA musicians inspire me to always be learning, and to listen to music with fresh ears. In turn, this influences my work with professional orchestras because conducting is, in part, about being able to inspire the musicians in a similar way.”

Inspiration is a tricky ticket: Too much intensity can push a performer into paralysis, or worse, boredom. Fancy, flowery instruction or too many compliments can cause musicians with talent and potential to flop by filling their heads with self-important notions. El Sistema emphasizes ensemble preparation and learning that builds community, so inspiration means not creating soloists as much as building social structures that are inclusive.

Dudamel says his rehearsal approach is based largely on his childhood experiences. “For me, the best way to encourage the YOLA musicians is to instill in them the same passion that I gained growing up in El Sistema, specifically by showing them that it is not only about the music, but also about learning what it means to be united, and to build a community with one another.”

Asked for more specific explanation of the environment and techniques he uses in YOLA rehearsals, he says, “When we can share our ideas and feelings in a safe and encouraging environment, that is when we can become passionate about learning and playing music together. Also, every piece of music tells a story, and I work with (the students) to understand the emotion and character of each piece.”

L.A. Philharmonic’s Director of Educational Initiatives Gretchen Nielsen says that Dudamel is the right person to lead the orchestra because he has an immediate connection to the students. “He has experienced intensive training in groups. He’s lived it. And I’ve never seen quite the level of teaching artistry as I do with Gustavo. He’s a beautiful artist and he knows how to communicate from the podium, through storytelling.”

Nielsen has been with YOLA since its founding in 2007. The East Coast native played tuba through high school, after which economics — “I couldn’t afford a tuba in college,” she says — shifted her focus to a double major in German and literature. Like Dudamel, her childhood experiences influence her work and fuel her dreams for the program. “For students pursuing music, I’m in total dream mode. Giving them private lessons — it’s all group-based now and will remain primarily that — and serious preparation through more recordings for their portfolios, providing airfare to travel to auditions, deepening chamber music muscles to maturity so that they can compete at a conservatory ...”

The list goes on to address academic aspirations for the students: very few students will find careers as successful musicians, so bolstering the tutoring they receive is vital. “The music doesn’t open up all doors,” she says. “Building a stronger academic structure doesn’t sound sexy, but it’s needed.”

Opportunities the students have to work with other youth orchestras, as YOLA will be doing in Oakland, Nielsen says, has remarkable payoffs. “When you take students out of their everyday world, they’re sponges. Their senses are heightened, they’re curious. They connect musically, socially. Mentorship happens automatically, with people that they don’t know.” And long after the collaborations, the interactions widen students’ perspectives on the world. “They learn there are people working as hard, having the same struggles, practicing with the same intensity, in other places.”

YOLA has hundreds of families from underserved neighborhoods on waiting lists. Nielsen says corporations and sponsoring partners are moved to provide support by both the program’s on-the-ground-level mission to be the change in students’ lives and the splashy performances they see at the Hollywood Bowl. “Seen over years, many of our supporters have watched the orchestra grow in big, public spaces,” she says. For the families whose children participate, there is also a double-layer appreciation of YOLA’s value. Recognizing that music teaches transferrable skills, sometimes opens the doors to college, and satisfies an inherent, native-to-all instinct that Nielsen calls “natural to musical creatures,” parents say they want their kids to move into higher economic spheres and be happy. But primarily, she says that mothers, fathers and caretakers of children in YOLA become supportive partners when they see their kids “come to life and light up while studying music.”