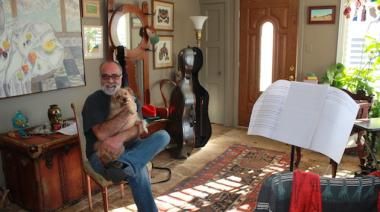 The honeyed hum of his cello wafts through the large front window of Emil Miland’s gemütlich cottage on a seaside street in Pacifica, as his canine companion Diller surveils an arriving reporter. After greeting his guest, the cellist identifies the piece he’s practicing as The Despot’s Rule, The Slave’s Revenge, composed for him by Shinji Eshima. Miland is ringing in the New Year with two concerts, both of them involving old acquaintances, as well as new music.

Eshima, who’s a bass player as well as a composer, grew up alongside Miland in the 1970's in the East Bay, and performed with him in the Oakland Youth Orchestra. Eshima’s piece for cello, piano, and marimba will be one of three on a January 11th program at Kohl Mansion in Burlingame, showcasing Miland and other musicians of the San Francisco Opera Orchestra (including pianist Steven Bailey and marimbist and tympanist Mark Veregge), with whom the cellist has been working for 27 years. The concert represents one of the month’s two homecomings for Miland; he first appeared in the 30-year-old Music at Kohl Mansion series when he was fresh out of the New England Conservatory.

“It’ll be an interesting concert,” the cellist promises. “Aside from Shinji’s piece, there’ll be the Mozart Oboe Quartet, with Janet Archibald on oboe, Kay Stern playing violin, Dawn Harms playing violin, and me. The second half is this huge piece by Erich Korngold, his Suite for two violins, cello, and piano left hand.”

Two weeks later, on January 25th, a concert billed as “Emil Miland and Friends” and funded by Osher Inside Out will herald the return of the Noe Valley Chamber Music series to the place of its birth — the Noe Valley Ministry, at 23rd and Sanchez St. in San Francisco — after four seasons at other venues, during which the old building underwent extensive repairs. Miland is also returning with this gig to his longtime neighborhood of residence. The series “has been very supportive of many artists trying new things,” the cellist points out, “so I wanted to make a collective of people who’ve lived in Noe Valley and whom I’ve met there over the years.”

That collective includes composer Jake Heggie and composer/pianist Candace Forest, though most of the other participating musicians performed at the Ministry previous to its closing. The concert will begin with a unique homage created by French composer Michel Merlet, which will, says Miland, “open up that renovated space [the Ministry] with a renovated piece. It starts with me playing the Prelude to Bach’s Cello Suite No. 1. Then Alison Lovejoy will play Merlet’s Interlude, for solo piano. And the Postlude is where Monsieur Merlet puts the new solo piece on top of the Prelude, and they get played together. It’s like having a kaleidoscope, seeing all these new patterns and colors.

“The second piece will be Rachel’s Dream, by Candace Forest, which she’ll play with me. Then the first half will end with the world premiere of Liam Wade’s new Full Fathom Five, with [soprano] Ann Moss and [pianist] Steve Bailey.” Moss will be recording the Wade song cycle, with text by Edna St. Vincent Milay, and another by Jake Heggie, at Skywalker Sound this summer.

“The second half of the Noe Valley concert will be all cello-piano,” Miland continues. “There’ll be music of Lou Harrison and David Conte, with Joan Nagano. And then Jake will join me [on piano] for a wonderful group of songs by Noel Coward that he ‘dished up’ for me, as he puts it, years ago, when he was still working at the pr department at the Opera. I’ll have five pianists playing with me on this concert!”

The Heggie connection will extend further into the year with Miland’s performing in Opera Parallèlle’s production of Dead Man Walking, in February. With the San Francisco Opera, he’ll be in the pit for Les Troyens during the summer, as well as participating in Moss’ recording and a session for Albany Records of David Conte chamber works, including his Cello Sonata. “I am so fortunate,” Miland sighs, hugging Diller, who seems to serve as an unusually quiet but adoring muse. “I’m just a kid from Alameda who grew up with his cello, and I’ve been allowed to have a life in music.”