Amid the amazements of progressive technologies involving producing, transmitting, and sharing music, it is decidedly pleasing to be struck by the sheer and simple power of a live human voice. Gather a dozen such voices, let’s say, an all-male ensemble performing century-spanning polyphonic folk songs, ballads, liturgical hymns, monastic chants, and the like, the awe-inducing effect is magnified.

Ensemble Basiani is designated Georgia’s official State Ensemble of Georgian Folk Singing in the tiny country of just under four million people. Sandwiched between Russia to the north, Turkey and Armenia to the south, and bordered east and west by the Black Sea and Azerbaijan, respectively, Georgia’s rich linguistic history dates back to the fifth century.

Returning on Nov. 15 after warm receptions during two previous visits to Cal Performances, Ensemble Basiani’s concert at First Congregational Church in Berkeley will highlight their wide-ranging repertory and the country’s complex culture and dramatic history.

Georgia spans about 27,000 square miles. Annexed by Russia in 1801, it briefly gained independence at the end of World War I. Annexed again in 1921, Georgia became a province in the newly created Union of Soviet Socialist Republics. Independence was reestablished in 1991 after the collapse of the Soviet Union.

Director and bass Zurab Tskrialashvili in an interview from his home in Tbilisi describes the traditions and regional influences that distinguish the ensemble’s varied repertoire.

“Georgia is a very small country, but very diverse with music and even traditional meals. Eastern Georgian music is based on complex kinds of singing. All three voice lines are doing the same movements and have two soloists with ornamental melodies and bass singing straight, as a drone,” he says. “Western Georgian is polyphony more developed, with complicated improvisations and three-part lines, doing their own melodies. At the end, they come to unified, one [single] tuning.”

Mountain music divides itself also. The Eastern songs are simple melodies that can be sung by one person. Frequently, phrases begin in the voice’s upper range, then decrescendo and rapidly descend into low tones. Tskrialashvili, on the phone, demonstrates the technique. Impossible to describe completely with words, the effect is eerie, but intimate, as if his voice, so bold at the start, has evaporated or been whisked away by the wind. “In the Western mountain part, the songs are best I think,” Tskrialashvili says. “They are ancient. Polyphony is of the complex kind; the voices are almost the same, but two upper voices are always leading. The lower voices are not drones; they do movement, but lesser so.”

Variety arrives also from the songs’ origins, which cover a spectrum of sources and applications. There are spiritual, work, healing, dance, lullaby, teasing, love, and humorous songs. Ensemble Basiani during its 20 years since being founded in 2000 has traveled to villages, churches, libraries, and repositories of ancient liturgical music to collect the repertory.

Tskrialashvili says newly discovered songs are less and less common and “progressive civilization has led to globalization of music through technology.” Nevertheless, the practice in small villages of passing vocal music orally, by memory, remains. “We go to villages to visit old people. But also, since 1901, there have been recordings. This is a main source for us to learn and study songs.” Traditional orthodox songs have been archived since the 19th century, despite Soviet campaigns against institutions like the Georgian Orthodox Church, according to Tskrialashvili. More than 800 manuscripts with hymns and chants have been collected by the ensemble, providing ample source material.

While in some songs text is critical — lyrics drawn from Georgia’s vivid, ancient poetry or hymns based on psalms or other liturgical references, other songs use glossolalia. “Orira” is a song combining yodel and glossolalia, the trance-like technique that features lyrics in made-up language. “It’s one of the top developed songs from the Guria region. It has no text,” says Tskrialashvili. “When people went from village to village, taking a horse and traveling all day, they had to sing. It was a long way, so they’d sing — maybe because Georgians do that. They just sing when working, traveling, in war, singing lullabies to babies ...”

“Raiudo” is a circle-dance song. It too, de-emphasizes text. The melody is primary and with glossolalia, people can sing any words or no words. “With Svaneti songs like this one, it doesn’t matter what you say. It’s what you sing and how you improvise,” he says. Similarly, “Chven mshvidoba” (Peace to us) uses only “peace to us” and “victory.” The emphasis is on melody, phrasing, improvisation.

The ensemble’s most haunting, transcendent songs, Tskrialashvili suggests, rely on chord construction and specific intervals between the low, droning voices and the baritone and tenor lines that float above. It’s a realistic, analytical assessment. Marvelously, those dry, sonic structures — or even a respectable recording or a writer’s feeble attempts to find poetic language — come nowhere near describing the music’s impact when performed by a group of men dressed in traditional Georgian black tunics and boots. There is no substitute for following, receiving, and hearing the beauty found in a live, human voice. 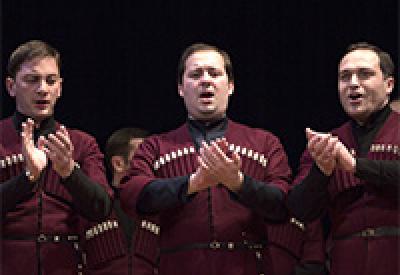 A Cappella Love Fest at the Harmony Sweepstakes Festival

A cappella singing groups of all kinds, from all over the world, descend on Marin this weekend, in a major musical event that has its own army of dedicated enthusiasts.

From Russia With Love of Choral Tradition

From medieval chants to premieres, the third International Russian Choral Music Festival gets underway Aug. 3 in San Francisco and runs through Aug. 10.