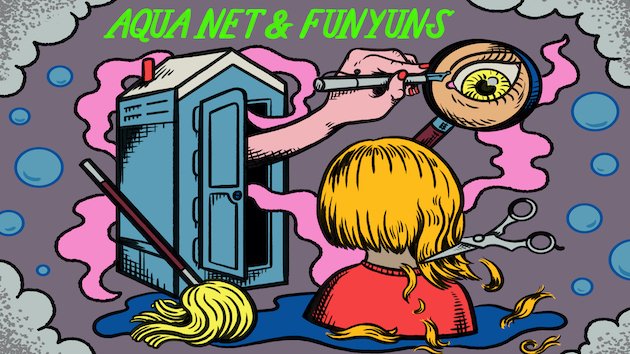 Banging out a collaborative podcast opera during July 2020, the artists — from among eight high-caliber composer/librettists, eight singers, and five instrumental musicians — say in a video preview the process was “fun,” “cool,” “hooky,” and across-the-board, exhilaratingly speedy.

Commissioned by Brooklyn-based genre-bending opera company Experiments in Opera and with just one month to create a new five-part opera composed of 25-minute episodic audio fiction segments, the participants’ all-ears-no-eyes objective was developed using a practice known well by television writers but unfamiliar to musicians accustomed to laboring alone in silos for months if not years on an opera libretto or score. Aqua Net & Funyuns set a 30-day counter-COVID hyper-fast pace: The artists met weekly by video, pumping out stories and sounds in online team meetings and workshops that embraced futuristic, non-normative plot lines and characters and soundscapes. Laying digital tracks that occasionally exceed real time human voice capabilities or electronic/digital technology — or would be prohibitively costly — it was possible to achieve what would be mostly impossible to reproduce in a traditional, live, concert-hall performance.

The free, debut podcast premiered to the general public December 7 and continues Experiments in Opera’s tradition of reconfiguring not only the way operas are created, but the manner in which artists and audiences interact with the art form. One of the company’s other recent, digital-native operas is Buick City, 1:00 AM, a murder-mystery podcast opera released in 2018 that reached over 10,000 listeners worldwide. Enthusiastic reception from media expectedly includes classical music publications such as Opera News, New York Classical Review and others, but also has the company’s comic-to-disturbing repertoire receiving enthusiastic response from the likes of Pitchfork, Rolling Stone, The New Yorker, Huffington Post, and more. The New York Times in a review of one production calls the work, “endearingly idiosyncratic.”

A quick glance at the program storylines for the new opera rolls out an intriguing landscape: There’s infidelity at a Kansas hair salon; a weed-induced sci-fi-like journey that begins in a porta-potty; an opera singer who can’t sing; fish tales; and a family’s queer identities hidden and, postmortem, exposed. Imagining the scores composers developed given the narratives and how the audio threads interlink is an exercise in futility, but based on the track record of Experiments in Opera, it’s easy to believe it will be as fun, cool, and “hooky,” as was the process used in its creation. Tapping into the past with Easter eggs (inserted jokes or hidden references and clues used in movies, films, TV shows, and even longer ago, in kids’ magazines as tiny “find-it” images hidden in large pictures), each episode provides hints to the next in the opera’s round robin configuration.

In the years since 2010 when the company was co-founded by composers Aaron Siegel, Matthew Welch, and Jason Cady, Experiments in Opera has commissioned 75 new works from 47 composers. Additionally, more than four hundred performing artists, designers and directors from the New York City arts community have participated in projects presented live at a variety of the city’s venues and online. An extensive archival library makes available past video works, podcasts, videos of live performances, and behind the scenes interviews.

The Jake Heggie/Gene Scheer opera is available for streaming through Dec. 31.

In a series of socially distanced productions, the young company gives a contemporary twist to some classics.